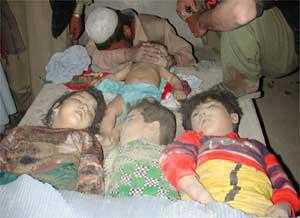 And the text that comes with it reads … “This Picture is taken in North Waziristan after a Drone attack Last Night. Why isn’t their story told? Are these children not as important as Malala Yousufzai?“

It sounds and also looks truly horrendous, but there is one little problem, it is fake. The picture was in fact lifted from an old news article (here) dated March 2011, so it was clearly NOT last night and NOT a drone attack.

Is this a unique example, no not at all. I found another similar example yesterday, here on Facebook … its a similar claim, but a different picture … 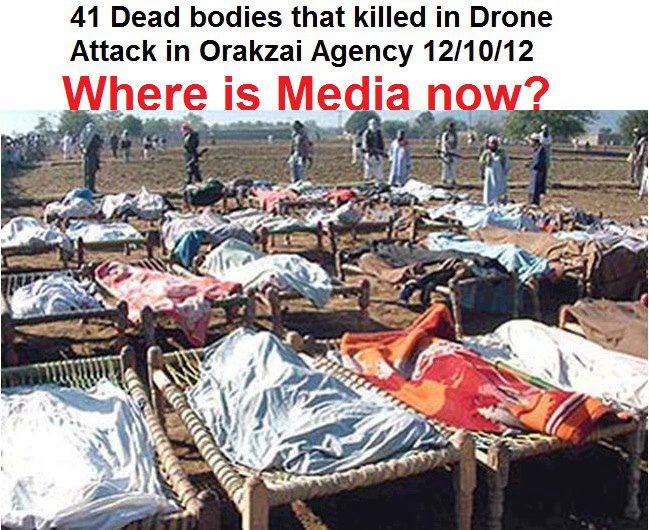 Once again it has been faked. This is an old picture lifted from a BBC news article (here) dated 2006. There we find that this is actually a story about 80 militants being killed in an air strike by Pakistani forces. No drones, no western troops, and not 2012, but 2006. What exactly are we supposed to believe here; that perhaps a drone fell through a black hole while in flight and magically went back in time to 2006 where it fell into the hands of the Pakistani military who then deployed it, hence that is why that drone attack picture appears on a BBC news article dated 2006. Yep totally credible … right?

So how did the posters of these false claims respond when this blatant deception was pointed out. An apology perhaps? Well one confessed that she had been duped,and explained “i have of course no information other than what others put out“. Neither did I, but I checked and within 30 seconds found the actual source of the picture. She also still insisted the message was justified. Another simply reverted to mockery (see below). Neither chose to remove their fake postings, they still remain … now that is indeed deliberate fraud, there is no excuse.

The fact that something so utterly tragic is being used for fake propaganda is quite frankly outrageous and completely immoral. I do not wish to tar all Muslims with this brush, because I remain confident that most humans (with or without beliefs) would find such behaviour to be immoral. What I will criticise however is beyond the culture; the Islamic ideology itself. What we can clearly see is that there appears to be an ongoing campaign of misinformation being actively waged on social media by strands of fanatical Islamic thought by individuals who have followed their ideology to its logical conclusion. This is not a unique example, others are finding similar examples of this behaviour (see here).

So when faced with claims of atrocities on social media, be very very skeptical, many fraudulent claims are being vigorously promoted.