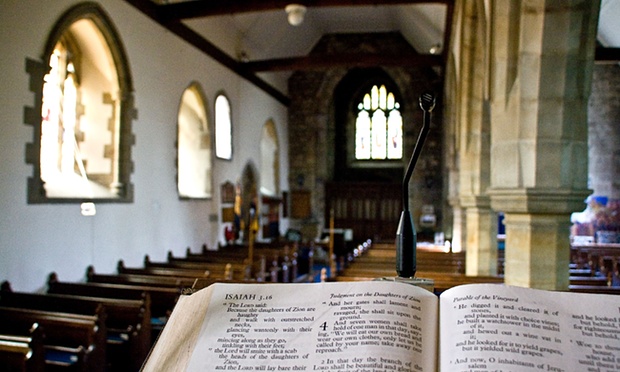 A recent survey now reveals that only 760,000 attend Church of England Sunday services and so obviously well over 62 million other people don’t. This is all part of an ongoing downward trend that has been happening for quite some time and consists of a 1% drop each and every year since the second world war, and so the decline of this bastion of Victorian Christianity is now very much in its twilight years.

How have they responded to this?

With the usual handwaving …

The church has embarked on a radical “reform and renewal” programme intended to reverse declining numbers, partly by diverting funds away from small, struggling rural parishes to urban churches where the potential for growth is greatest.

Several urban churches have shown remarkable growth in the past year, according to the C of E. St Swithun’s in Bournemouth, a church established in 2014, now has weekly attendances of 500, and King’s Cross church in central London has grown from single figures to 500 in the past five years.

But … and this is a very big “but” … it is all in so many ways utterly pointless because they are falling further and further behind the on-going evolution of the human moral arc. They have just voted to suspend the membership of the entire US arm of their community …

The Anglican Communion voted to censure its American branch, the Episcopal Church, during a meeting in Canterbury, England, called to reflect on the future of the communion.

The vote Thursday (Jan. 14) to suspend the Episcopal Church from voting and decision-making for a period of three years was leaked a day ahead of a press conference that had been scheduled for Friday.

Well basically the folks in the US have moved with the times and demonstrated that they strive to be decent human beings by embracing equality for gay people by authorising their clergy to perform gay weddings. So basically the response by over two thirds has been a formal public declaration that they are homophobic bigots and that anybody who does not agree with that stance is out.

It is of course a rather strange stance to take because the only justification for that is “the bible says so”. This is very odd argument, because (for example) the bible also endorses slavery from cover to cover, and gives specific guidance on not just whom you may enslave, but also on how to correctly beat your slave. That guidance is happily discarded by these Victorian clerics as a historical relic and wholly inappropriate for our modern age, and yet they opt to keep the homophobe bits as unassailable truth. How exactly does that work, how do they decide what bits to discard and what bits to keep?

As their inevitable decline continues, they might indeed attempt to now pin their hopes upon a “network churches that meet in cafes, pubs and other places outside of consecrated buildings” but under this rests an assumption that location is their problem, and that is the flaw because it is not. As time passes the human lifespan will continue to bring it all towards a final close as the remaining elderly members fade into memory.

It will soon be time for some social housekeeping

The UK still has 26 C of E Bishops who are not elected by the population but instead get to sit in the House of Lords and meddle in the affairs of state.

Housekeeping Item 1: Our representatives should be selected by us and not solely on the basis of what specific supernaturalism they happen to embrace.

I’m not alone in such thoughts, MPs from all parties were asking this exact question last Thursday in parliament …

In a debate on House of Lords reform yesterday, eight MPs from four different parties called for an end to the automatic right of 26 bishops from the Church of England to sit and vote in the House of Lords.

Beyond all that, we also have the concept of “Faith Schools” within the UK where the number of children educated by C of E run schools far exceeds the total number of people who now actually attend the C of E … 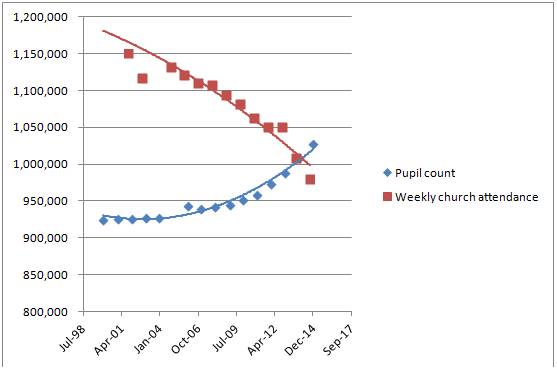 It is quite probable that without the Faith Schools the C of E would have already been relegated to a footnote in history. The secondary schools they run have a reputation for good results, and so there is a demand for them, one that exceeds the supply of available places. The net effect is that when it is time for kids to start school, some parents suddenly find God and start attending their local C of E simply because a nod from the vicar will secure a place in a C of E school. Obviously once the kids are in, the parents can quit going to church, and so the deal is that getting the nod from the vicar usually requires a six month attendance record. The game that the C of E is playing here is that once people have been going for about six months they often end up making friends, join the wine club, etc… and so just might stick with it. It is perhaps this constant supply of new people that more than anything else enables the C of E to still exist.

Are these secondary faith schools successful because they are religious? Nope, not at all, what is happening is that they are naturally selecting pushy parents who are prepared to endure 1 hour of extreme boredom every week simply to get their kids into a good school, so they will of course be there to offer continuous support for the kids.

Housekeeping Item 2: We really need to move beyond having almost a third of our schools being run in a very selective way by religious groups who do not represent us, not do they hold an ethos that is an appropriate one within an educational context. Why exactly do they get to decided who may attend when about 90% of the funding they have is state funding and not theirs?

The UK is a nation where the head of state is also the head of a religious body (the Queen is officially the head of the C of E). Additionally our laws are influenced by 26 religious clerics, and many of our schools are run by religious organisations … yet we are also a very secular mostly non-religious population.

As a stark contrast to that, we have the US that was founded as a wholly secular nation with a solid wall sitting between the religious and the state, and yet vast swathes of the population are highly religious to such an excessive degree that they have long since abandoned rationality and happily dismiss science as fiction, and embrace myths as fact.

With a bit of my tongue in my cheek, perhaps what the UK has done historically is to effectively immunise the population by taking a potentially deadly belief, rendered it harmless over quite a few centuries of bloodletting, and then injected it into the young, but it is all perhaps a mute point, because the ongoing decline that is bringing it all to a close implies that the my suggested bits of social housekeeping will be not just desirable, but inevitable.