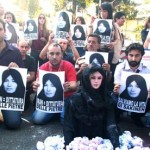 Once again we have yet another example of how barbaric the Islamic regime in Iran is. There are reports that they have sentenced Sakineh Mohammadi Ashtiani – the 43-year-old Iranian woman who faces execution after being convicted of adultery – to 99 lashes in prison for “spreading corruption and indecency”.

So what exactly does that mean? Well, what it apparently translates to is that she (while locked up in their prison) permitted the UK’s Times newspaper to publish an unveiled picture of her face in a newspaper article.

OK, so here are the facts we know:

In other words, she is being condemned for the actions of others, and the picture is not even of her.

You can read the full article published in todays UK Guardian newspaper here.

This is yet another example that illustrates how corrupt, immoral and viciously dangerous the Islamic cult is.

He added: “My mother has been called in to see the judge in charge of prison misdemeanours, and he has sentenced our helpless mother to 99 lashes on false charges of spreading corruption and indecency by disseminating this picture of a woman presumed to be her [Sakineh] without hijab.”

Speaking to the Observer today, Sajad said: “This news reached us through some prisoners who were released from Tabriz prison recently and have informed my mother’s lawyer, Houtan Kian, that she has been given a sentence of 99 lashes for the alleged unveiled photo of her published in western media.


Last month she was presented on Iranian state television where she “confessed” to involvement in the murder of her husband in a television interview recorded in Tabriz prison, where she is being held. It was suggested at that time that the 43-year-old had been tortured for two days before the recording of the confession.

Sajad also appealed to Mohammad Mostafaei not to make any more comments either on his mother’s case or on his father’s death.

Since her case has captured world attention, Iranian officials have claimed she was an accomplice to the murder of her husband, although her government-appointed lawyer, Houtan Kian, has accused the government of inventing charges against her.

So … to the person who posted the “ISLAM IS BY DEFINITION MODERATE” message to my Facebook page (you know who you are), you may wish to seriously reconsider that stance.

This, and many many other countless examples, tell a very different story.