Much to my complete and utter astonishment, two diametrically opposed ideologies have climbed into bed together at Goldsmiths university in order to publicly oppress and gag those who take a stance for the freedom to believe whatever you wish and the freedom to criticise those that oppose that.

So let me explain how this all played out.

On 30 November 2015 Maryam Namazie gave a talk at Goldsmiths University. She had been invited by the Atheist, Secularist and Humanist Society, and as you might anticipate, the Islamic society tried to shut it all down … 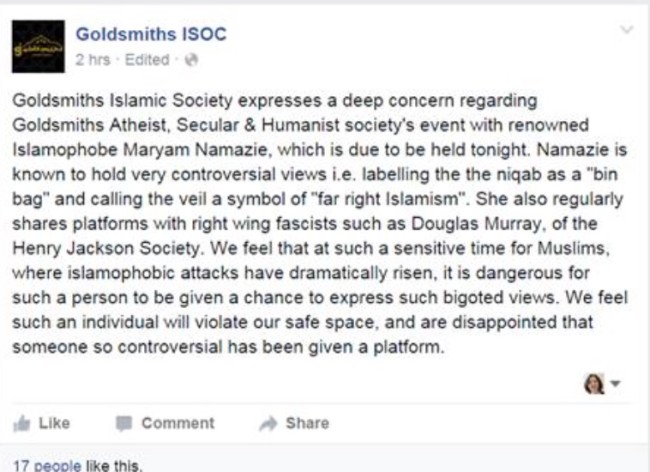 Douglas Murray a fascist! … what planet are these people living on?

So anyway, no formal request to ban her was raised by them and the talk went ahead. Then this happened …

After my talk began, ISOC “brothers” started coming into the room, repeatedly banging the door, falling on the floor, heckling me, playing on their phones, shouting out, and creating a climate of intimidation in order to try and prevent me from speaking.

I continued speaking as loudly as I could. They repeatedly walked back and forth in front of me. In the midst of my talk, one of the ISOC Islamists switched off my PowerPoint and left. The University security had to intervene and remain in the room as I continued my talk.

Eventually the thug who had switched off my PowerPoint returned and continued his harassments. At this point, I stood my ground, screamed loudly and continued insisting that he be removed even when the security said he should stay because he was a student. When he was finally escorted out of the meeting, discussions on many issues from apostasy, the veil to Islamism and Sharia laws continued, including with some of the ISOC “sisters” who remained behind.

In the Q&A, a women’s rights campaigner who had been kidnapped by Islamists in Libya and held for three days said that the attempts at intimidation reminded her of those dreaded days.

Another CEMB activist said one of the ISOC thugs disrupting the meeting threatened him by pointing a finger to his head.

The behaviour of the ISOC “brothers” was so appalling that a number of Muslim women felt the need to apologise, to which I explained that no apology was needed from those who were not to blame.

Absurdly, this very group which speaks of “safe spaces” has in the past invited Hamza Tzortzis of IERA which says beheading of apostates is painless and Moazem Begg of Cage Prisoners that advocates “defensive jihad.”

The ISOC’s use of rights language are clearly a cover to silence any critic and opponent of Islam and Islamism and to normalise the far-Right Islamist narrative under the guise of Islamophobia and offence.

Despite the many attempts of the ISOC “brothers,” the meeting ended successfully and raised critical issues, including that criticism of Islam and Islamism are not bigotry against Muslims who are often the first victims of Islamism and on the frontlines of resistance. The meeting also helped expose the Islamists for what they are – thugs who cannot tolerate dissent.

Goldsmiths Feminist Society stands in solidarity with Goldsmiths Islamic Society. We support them in condemning the actions of the Atheist, Secularist and Humanist Society and agree that hosting known islamophobes at our university creates a climate of hatred.

We showed our support on our Facebook page by sharing ISOC’s post with a message of solidarity. Our Facebook page is designed as a space for us to communicate with our members, and their safety is our first priority, under the policies set out by our Student Union. We reserve the right to remove comments and posts that violate these terms or contribute to the marginalisation of students.

They have got to be fracking kidding … Islam within almost every single variation is diametrically opposed to any and every variation of feminism, and so by issuing a statement like this they are basically backing those that embrace a belief that wants to oppress and suppress their desire for equality, and are taking a stance against Maryam who actually vigorously supports the feminist ideals of equality. I think reading their statement has just broken my industrial strength irony meter.

As you might expect, the posting caused a huge backlash and so they got flooded with comments like these … 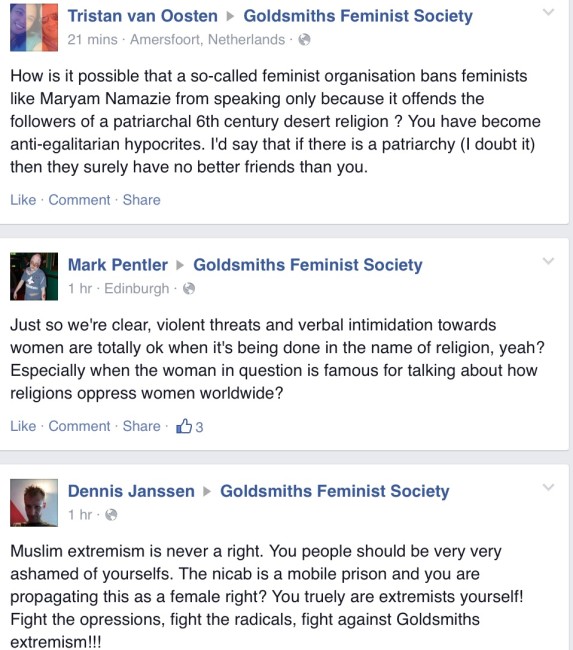 Least you have any doubts about it all, here is an article that describes what happened.

The Video of what actually happened during Maryam’s talk is now available, so you can watch and see for yourself …