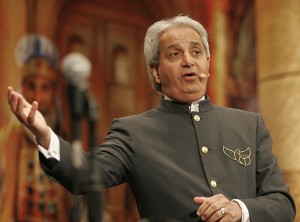 Televangelist Benny Hinn has asked supporters of his ministry for $2.5 million in donations, which he says an anonymous donor will match dollar by dollar to help him get out of debt (yea right).

OK, so lets see if I have this right … the guy who pushes the “Prosperity Gospel”, the belief that his imaginary friend  will bestow financial blessing upon those who are “true” Christians, is in debt to the tune of $5 million, and now needs to plead impoverishment and beg for money, and so …. (Oh bugger, I just broke my irony meter).

But wait, this guy has received (conned) a huge fortune from his followers (idiots), so what has happened to it all? The answer is, a private jet, luxury cars, and a rather lavish lifestyle.

Are there really people out there stupid enough to simply hand over their money to fund this fraud? Sadly yes. If you are one of those poor fools determined to enrich this kook by making yourself even poorer, then here are a few facts you should ponder over first.

If you have been considering the idea of making a donation to a guy who is demonstrated to be a fraud, and a liar, it is time to pause and think again.