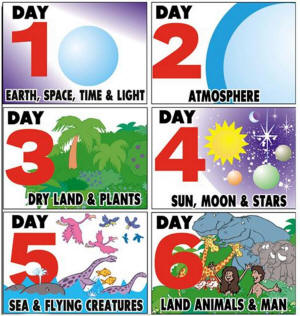 Most people would dismiss the idea of 7 literal 24 hours days as described in the book of genesis as factual .. except perhaps Answers-in-Genesis Ken Ham. Ken aside, one of the most popular views, one that I once personally embraced, is the thought that it is simply a metaphor, and that each day is a symbol that represents a geological age.

Is even this credible?

I once used to think it was, but have since changed my mind. Let me now take you on a journey into Genesis so that you can see why this is the case.

1 In the beginning God created the heaven and the earth.

You can of course interpret “beginning” to mean both, but that covers a vast span of time.

This is not a great start

3 And God said, Let there be light: and there was light.

4 And God saw the light, that it was good: and God divided the light from the darkness.

5 And God called the light Day, and the darkness he called Night. And the evening and the morning were the first day.

Give Day 1 a casual glance and you might miss an important point. If you take a quick peek ahead you will find that God does not create the sun, moon or stars until Day 4, so where is all this light on Day 1 coming from?

Please don’t say the “Big bang”, because it is quite clearly not talking about the universe, just the earth, so don’t go reading into it things that are simply not there. What is crazy is that the earth comes first, and the rest of the universe follows later on. From a poetical viewpoint, it has a nice flow to it, but from a scientific viewpoint, Day 1 does not in any way align with our modern understanding. How can you possibly have day and night with no Sun, or for that matter an earth with no universe. This is quite frankly wrong.

6 And God said, Let there be a firmament in the midst of the waters, and let it divide the waters from the waters.

8 And God called the firmament Heaven. And the evening and the morning were the second day.

Here in Day 2 we appear to have rather a lot of water sloshing about. Apparently splitting up this water into two parts leaves us with a gap called heaven. Once again it is poetical, but this is not a cosmology known to modern science. Some might attempt to interpret Day-1 as a description of the big-bang, but doing so is akin to jamming square pegs into round holes. Then along comes Day 2 to break all such pegs and round holes by taking a sudden left-hand turn into this very weird water-centric cosmology.

So what will day 3 bring? Let’s go and find out.

9 And God said, Let the waters under the heaven be gathered together unto one place, and let the dry land appear: and it was so.

10 And God called the dry land Earth; and the gathering together of the waters called he Seas: and God saw that it was good.

11 And God said, Let the earth bring forth grass, the herb yielding seed, and the fruit tree yielding fruit after his kind, whose seed is in itself, upon the earth: and it was so.

12 And the earth brought forth grass, and herb yielding seed after his kind, and the tree yielding fruit, whose seed was in itself, after his kind: and God saw that it was good.

13 And the evening and the morning were the third day.

Day 2 may have been weird, but Day 3 is truly bizarre. We have land and we have plants and trees, but we still don’t have the Sun, moon or stars. That’s all part of Day 4. We know plants use photosynthesis, so without any Sun all these plants are hanging around in pitch black darkness – how exactly does this work?

As I also pointed out earlier, what exactly is a day and night without any sun yet?

This sequence of events is way out of whack. We know that in reality fish evolved long before plants. Yet here we have no Fish, we still have to wait two more days for God to magic them into existence. We also know that there was no grass until it evolved during the Cretaceous period and that flowering plants (angiosperms) did not evolve until the Jurassic period. That was all long after the evolution of fish in the sea.

This is simply not working as even a shadow of reality. Everything is in the wrong order.

14 And God said, Let there be lights in the firmament of the heaven to divide the day from the night; and let them be for signs, and for seasons, and for days, and years:

15 And let them be for lights in the firmament of the heaven to give light upon the earth: and it was so.

17 And God set them in the firmament of the heaven to give light upon the earth,

18 And to rule over the day and over the night, and to divide the light from the darkness: and God saw that it was good.

19 And the evening and the morning were the fourth day.

Finally, we get the Sun, moon and stars. So apparently the earth and all plant life on earth pre dates the Sun and all the other stars in the universe. I assume you can appreciate that this is a complete magical fantasy and is not by any stretch of the imagination scientific.

20 And God said, Let the waters bring forth abundantly the moving creature that hath life, and fowl that may fly above the earth in the open firmament of heaven.

21 And God created great whales, and every living creature that moveth, which the waters brought forth abundantly, after their kind, and every winged fowl after his kind: and God saw that it was good.

22 And God blessed them, saying, Be fruitful, and multiply, and fill the waters in the seas, and let fowl multiply in the earth.

23 And the evening and the morning were the fifth day.

Day 5 now has life bursting forth and in a manner that is completely out of step with what really happened. Here we have life emerging in the oceans and the air at the same time, but no land animals yet. According to this account the whale emerged from the ocean, but in reality whales started out as land animals and then later evolved into sea creatures. Flight was also an evolutionary step taken by land animals. Yet here in the Genesis account we first have flight on Day 5 but no land animals, they come later on Day 6; it is the complete opposite of well-established facts.

On Day 6 there is no scope for evolution, but given the progress so far, that should be no surprise. Here we find animal templates that cookie cutter style replicate copies of the same type. This is a complete contradiction to what really happened. Natural selection over billions of years has produced and continues to produce ever changing variations of life, the very concept of animal templates is gibberish.

26 And God said, Let us make man in our image, after our likeness: and let them have dominion over the fish of the sea, and over the fowl of the air, and over the cattle, and over all the earth, and over every creeping thing that creepeth upon the earth.

28 And God blessed them, and God said unto them, Be fruitful, and multiply, and replenish the earth, and subdue it: and have dominion over the fish of the sea, and over the fowl of the air, and over every living thing that moveth upon the earth.

29 And God said, Behold, I have given you every herb bearing seed, which is upon the face of all the earth, and every tree, in the which is the fruit of a tree yielding seed; to you it shall be for meat.

31 And God saw every thing that he had made, and, behold, it was very good. And the evening and the morning were the sixth day.

Here on Day 6 we get both land animals and humans appearing at the same time with man being put in change of all the animals. What we know is that land animals first appeared about 430 million years ago and that modern Homo Sapiens are a very recent arrival (approx 200,000 years ago). Since we are supposed to be having dominion over all this wildlife,  that would have left all these poor animals wandering about without any oversight for … oh about … 430 million years.

God apparently took day 7 off for a rest, so nothing more happened. However, even this is a bit bizarre. Why would an omnipresent, omnipotent all-powerful and all-knowing being need to take a day off for a rest?

So there you have it. Testing the idea that the Days within the Genesis creation story align with geological ages is quite clearly wrong. It contradicts and conflicts with known reality. As I said at the start, in the past I used the day-age belief as a means to reconcile the bible with science and fit them together, but in doing so never really looked at it to see if there was any substance to such thinking.

There are of course numerous variations and attempts at bending Genesis 1 so that it fits. For example suggesting that all that water sloshing about at the start is really a dumbed down way of talking about hydrogen and also the proposal that God’s supposed utterance of “Let there be light” was the start of the big bang.  Yet even when you bend it out of shape by reading into the narrative things like this that are simply not there, it does not work. For example, if the above hydrogen hypothesis was correct, then apparently there was rather a lot of it sloshing about prior to the big bang. That is still a complete fantasy that conflicts with some rather basic physics.

What it really is

It is all very poetical.

It is also quite clearly a myth. What we have is an attempt by early humans to try a grasp an understanding. It has now been left far behind by our modern understanding.

While we can still perhaps cherish and admire the poetical turn of phrase, and applaud it as an early attempt to craft a narrative, we should not embrace it as literal “truth”. We really should accept it for what it actually is, a creation myth, and move on to embrace our far better evidence-based scientific understanding and stop desperately clinging to it as “truth”.

It took me a bit of time to finally put aside my cultural inheritance and take that step. I encourage you to do the same.

1 thought on “Genesis as a metaphor, does even that work?”