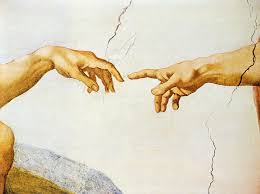 It is quite common to adopt a position of extreme absurdity, and yet at the same time also robustly criticise other equally absurd positions with good arguments. Perhaps the very best example of this is illustrated by Answers in Genesis. Via the Friendly Atheist Hemant Mehta I have a very good example. Answers in Genesis is creationism taken to the extreme. Their stance is that the entire universe is 6,000 years old. Yet when faced with other equally absurd claims, such as belief in a flat-earth, then for them that is a truly daft idea.

Answers In Genesis – Arguments against Flat-Earth

What is new and news here is that a writer and teacher named Jay Johnson has pointed out that if you take Dr Faulkner’s essay and swap just 5 words, then what you get is a debunking of creationist beliefs.

Here is his word swap key

Copy and paste Dr. Faulkner’s article into a Word doc then apply “find/replace” to make the following changes …

Here is the result

What you get is a very articulate criticism of Young-Earth Creationism … and remember that this was written by a young-earth creationist.

How Do We Know What We Know?

Young-earthers raise an excellent epistemological question: how do we know what age is the earth? For three decades, I asked this very question of students in the first semester of my introductory geology class. The context of this question was the early history of geology. I would ask my students what age they thought the earth had. All my students would answer that the earth was old… When I asked my students how they knew the earth was old, not one student could give me a good reason…

… if one becomes convinced that the earth is young rather than being old, that is a major change in one’s worldview. If the earth truly is young, then we have been lied to about the earth’s age our entire lives. One must ask how and why this lie was created and perpetuated. Ultimately, this line of thinking leads to the conclusion that there must be a vast conspiracy about the earth’s age that has been going on for a long time. … It seems that the conspiracy to hide the earth’s true age is the motherlode of conspiracies. All other conspiracies easily are subsumed by this one.

… Why is the cosmological conspiracy believed by young-earthers all-encompassing? The answer lies in the fact that the alleged conspiracy is cosmological. Cosmology is foundational to one’s worldview. If we have been lied to about such an important, fundamental issue, then all other conspiracies are relatively small matters in comparison. Once one comes to believe that there is a vast conspiracy about cosmology, it is a relatively easy step to believe in many other sub-conspiracies.

But young-earthers typically are undeterred by such advice. They dismiss it as the mere teaching of a man. They proudly proclaim that they want to stick solely with what the Bible says. They fail to understand the importance of sound teaching taught in the very Bible they profess to uphold. God has ordained the church for several purposes, including instruction in the Scriptures. 1 Timothy 3:2 says that an overseer must be able to teach. But young-earthers frequently dismiss instruction from Godly men, insisting that they know more about what the Bible says than men who have devoted many decades to prayerful study of the Scriptures. It never occurs to young-earthers that they may be wrong in their understanding of the Bible. Nor does it occur to them that they have set themselves up as authorities on the meaning of the Bible, but their approach completely undermines the possibility of such an authority in the first place. … Some young-earthers also fashion themselves to be experts on science and the methodology of science. Consequently, they think of themselves as competent to dictate to scientists, both godly and ungodly, on how science ought to be conducted. But their definitions and practice of science appear to be formulated to make science as generally understood impossible.

Where do these young-earthers get the notion that they are capable of rewriting so many disciplines of study? This is particularly galling when one considers the limited science education that most young-earthers seem to have achieved. Their ready stock answer is that they haven’t been indoctrinated by all those years of study. These young-earthers fail to realize that without all that study, they don’t even understand what they criticize.

It is intellectually lazy for Christians in their fear to insist on a strictly literal approach to all of Scripture. Sadly, young-earthers who demand this hyper-literal approach to the Bible readily abandon it when it suits them. Ultimately, young-earthers place themselves in a position of authority while simultaneously deconstructing the idea that there can’t be any authority other than Scripture. They are blind to the fact that they have equated their understanding of Scripture with what the Bible says.

Another irony is that while young-earthers regularly dismiss any teaching on Scripture that they disagree with as mere teachings of men, they readily embrace the teachings of men with whom they agree.

This raises the question of whether the Christian version of the young-earth movement is a cult. The young-earth movement has some elements of a cult. Young-earthers insist that their understanding of the Bible is the only true meaning of Scripture, dismissing all others as the mere teachings of men at best, and at worst, the work of the devil. This is the major defining characteristic of a cult. On the other hand, a cult often denies one or more cardinal doctrines of Christianity, such as the deity of Jesus Christ. While some individual young-earthers who identify as Christian may stray a bit from orthodoxy, there is no consistent pattern of denying central tenets of Christianity among young-earthers. Furthermore, a cult usually is led by a central figure. As of yet, there is not a single person who seems to be leading the Christian version of the young-earth movement.

In order to escape the delusion of a young earth, believers in such ideology must first realize that they have been duped by some very poor arguments.

So, I continue to battle this threat to biblical Christianity. I’m not interested in debating young-earthers. I don’t even try to convince them. Instead, my target audience is those who are true seekers, not those who think that they’ve already found truth in the falsity of young earth, without doing the proper research. I also provide answers to those who have seen the unfortunate effects of the young-earth movement in people that they know and love.

The Veil of Ignorance

It reminds me of something.

A rather famous philosophical concept is the “Veil of Ignorance“. When thinking about how you could construct a good society that you yourself would play a role in, then what decisions would you make if you did not know the role you would play?

For example, you might decide that there would be a king and also slaves. If however you were then going to be randomly assigned to live in one of those roles, you would suddenly decide that such inequality was a really bad idea and so you would strive for equality amongst all available roles.

Here is another example. When very young, my parents would ask me to cut two slices of cake, but also advice me that my sister gets to choose first. Net effect, I cut very carefully to ensure both slices were exactly the same.

It is part of the psychological makeup of many humans to embrace specific ideas and beliefs as “true” and to dismiss other variations as false without really thinking about it. For example, a committed evangelical will assure you that their specific variation of belief is the only truly true variation, and that other variations such as Catholic or Methodist are simply man-made and wrong. If somebody in such a position listed out the criticism that they have for “them”, and then applied that exact same standard of criticism to the variation of belief that they embrace, what happens?

Because we invest emotionally in specific ideas, we tend to be unable to do this, and so often we are wholly and consistently inconsistent.

It is all perhaps part of the human experience.

So what should we believe?

Skepticism is not about criticism of “them”, but is perhaps much more about sifting fact from fiction, and striving to believe as many true things as possible.

When faced with a claim, any claim, then it is not your responsibility to debunk it, Instead, it is up to whoever is making the claim to provide sufficient evidence. If something does not have sufficient evidence, then not believing it is the most rational position to adopt.