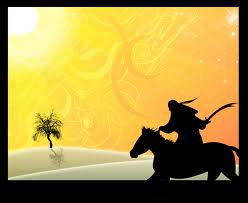 Right now I am having a semi-friendly “discussion” in a Facebook group with a bunch of rather committed Islamic folks. It’s their thing, they have this concept called Da‘wah. That literally means “issuing a summons” or “making an invitation”. If this is not something you are aware of, well think of it as being similar to the evangelical thing of spreading the message. Basically, you get bonus points in the eyes of God and your fellow believers for doing this.

Most of the dominant mind-viruses that infect humans will have some means of motivating those that are infected to go and infect others. This is because over the ages the mind-viruses that have become the most successful at propagating will have been naturally selected to thrive, so this is exactly what we should expect to find within such arenas.

What is interesting is that one of the most common claims I trip over is the “God did it” claim, it goes something like this …

There are a few very obvious flaws here which hopefully most readers are familiar with. The most immediate observation is that this is paleolithic thinking – when faced with a mystery, something unknown and mysterious, then you just declare “God did it”. Our ancestors did exactly this when faced with the sun, the moon, thunder, weather, seasons, etc… For each of these we now understand and have an answer that does not involve a God, so the historical track record for the “God did it” answer being right is exactly zero.

Today we face the, “Where did the Universe come from?” question and so of course the religious claim “God did it”. Interestingly enough, in every such case, the specific God they have in mind is their specific concept of a god (they will happily dismiss all other Gods).

Anyway, basically they have …

When I pointed this out in the latest debate, the chap quickly back peddled and said this …

I said every creature has a creator!!
God is not a creature or creation! He’s the CREATOR!!
Even if we agree everything has a creator, that’s fine because god is not a thing!
He’s not comparable to anything. He’s unseen and unimaginable!!

Sigh! … yep, it’s a face-palm moment … so apparently he is introducing some wiggle room here … not quite everything has a creator, and now apparently his god concept is an exception to this rule … and need I point out, the actual evidence for any of this is (as usual) exactly zero.

The most honest and correct answer when faced with an unknown is to simply observe, “I don’t know”. Making up a supernatural answer is not a real answer and tells you nothing at all about reality. In fact the harm that it does is to stop you seeking the correct answer.

So why do this, why do I have dialogues in such groups, is it because I have some scientific missionary zeal? Nope, not at all, personally I enjoy having my ideas challenged, it helps me to think things through. I’m also under no illusions that those I directly engage with will change their minds, the zealots tend not to do so. If they encounter a question that rattles them, they will simply rush off to some cleric who will whisper some religious babble into their ears to pacify the concern. Instead the folks that such dialogues are really for are those that sit quietly on the fence, have not taken a public stance, but instead just listen in and ponder over what is being said.

Nobody is beyond reach, and while they still breath even the most fanatical can be reached. The Islamic founder of one specific Facebook group, a true fanatic, threw in the towel one day and openly declared himself to have renounced Islam … he could do so because he lived in the west out of reach … but as you might imagine he was on the receiving end of a lot of threats and abuse when he did so, so I do applaud both his courage and his honesty.

If you are curious about the FB group I’m having this latest dialogue in, well this latest one is called ATHEISM DEBUNKED BY MUSLIMEEN and yes, that is the one where they have a rule against logic and reason (thats rule 4). If you pop in, you will find all the usual stuff, Zakir naik YouTube clips, evolution is a lie claims, god did it claims, you are all going to burn claims, and heaps of quran quotes, and the usual sprinkling of folks who appear to have extreme difficulty manging to get to grips with turning their caps-lock key off.

Oh and since it is supposed to be debunking atheism, you might be curious to ask, “How much actual debunking of non-belief has been achieved?” … you can guess the answer, so far exactly zero. They might beg to differ, but you need to remember that is their approach where they post a daft claim, have it debunked, then respond with some quran quotes and claim victory. They might delude themselves, but nobody is fooled.