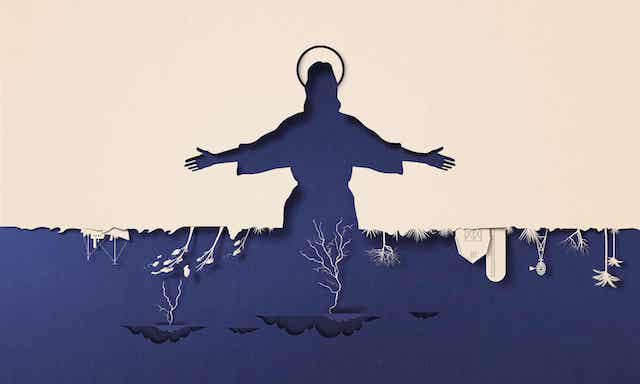 Words such as Atheist, Muslim, Democrat, Republican, or Evangelical are short-cut terms used to describe where we stand on various political or religious issues. Useful as they are, they are also often deceptive because they paper over a vast degree of complexity that rests under the surface.

here are a few examples …

OK, you get where I’m going with this now. It might indeed be tempting to make assumptions when you hear such tags, but wisdom means pausing and not doing that because of the underlying complexity.

What Would Jesus Do? Talking with evangelicals about climate change.

The Guardian has a new column in which they have been exploring the topic of Climate Change in deep south, and one specific column involved them engaging with Evangelicals.

The immediate default thought is that since these are the Trump supporting base then for them the answer will of course be the un-surprising discovery that they will all reject the scientific consensus … right?

The author had grown up in the deep south, hence she carries a lot of assumption that are very much rooted in her experience …

…my high school experience felt ripped from the pages of the Footloose script. Local parents disowned gay sons; classmates openly questioned the science of evolution in biology class; Young Life leaders plastered an Abstinence Pledge on the wall of our public school cafeteria …

I wrestled with my own preconceived notions and past experiences, and was surprised when conversations took inspiring, if not transcendent, turns

Here are some of the voices.

Inglis has been trying to start the conversation in conservative southern circles since having his own conversion moment on a trip to Antarctica in 2006. A scientist drilled into the ice, and Inglis saw, firsthand, the Industrial Revolution’s impact on the ice record, which revealed a long period of stability with a sudden uptick in carbon dioxide levels. He accepted then that burning fossil fuels changed the chemistry of the atmosphere. He was later booed at public events for stating his belief in climate change.

Mary Beene, a pastor in Savannah …

“in our congregation, it was a more controversial topic than race or sexuality”. She observed that some women in the south who believed in climate change worried “it simply would not be polite to challenge what the men … were saying in public.”

Tony Lankford, the senior pastor at the First Baptist church in Saint Simons …

“regardless of political or theological leanings, there is agreement upon the basic tenet that God formed all of this beauty around us, and scripture [Genesis 1-2] gives us a responsibility to be stewards of that creation. For me, thus, mismanagement and abuse of creation is not only immoral or unethical, but is sinful.”

Some confirm preconceived notions and are clearly entrenched, but some do also surprise in an encouraging way. For example the Republican congressman who had a conversion experience when it comes to the acceptance of the reality of climate change.

Climate Change is perhaps the greatest issue our species has ever faced and so a bland dismissal of all who align with the label “Evangelical” is foolish because it simply does not truly encompass how things really are. We need to engage and cooperate on address climate change, it is simply too important to not do so. Doing so also perhaps means putting aside our preconceived notions and biases.

The anti-science zealots might be the loudest voices in the room, but there are many others as well.

A note from the author: I started this column with the intention of joining a conversation I knew was already happening in the south, and your emails helped make that a reality last week.

I heard from retired marine biologists in Arkansas, philanthropists in Georgia, theologists in Virginia, poets and boat captains in Louisiana, lawyers in Florida, clean air activists in Mississippi. I also heard from climate change deniers, brand marketers, and … an old boyfriend.

I want to witness and listen to the south as it really is – not just how I want it to be. I’m doing my best to stay curious and open-minded and look forward to your continued responses. I hit the road in January, with an eye toward Mississippi, Louisiana, and Alabama. What should I see there?