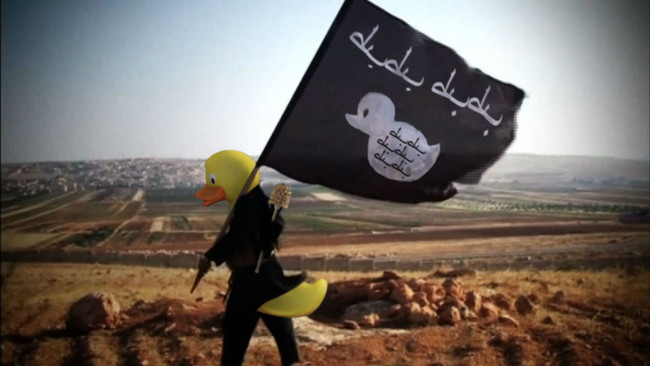 I’m not really a 4chan fan, but I do confess that I find the ISIS Ducks to be rather amusing, it comes via the UK’s Independent …

4Chan is far from the safest or friendliest corner of the internet – but sometimes it comes up with the goods.

On a private board on the site this week someone posted the message, “how about castrating the image of IS by replacing the faces on ALL the propaganda photos with bath ducks” – and 4Chan users rose to the occasion gloriously.

The submissions have been collected on Imgur as an album called ‘create the duck state‘, the fruits of which can be seen below.

Least you wonder, the Arabic on the above flag is supposed to read “duck duck duck”, but Google translate made a bit of a hash of that for the guy who photoshopped it, and so it actually reads, “Medicine Medicine Medicine ..”, so I guess it must be a rather sick duck.

So here are a couple of my favourite ducks 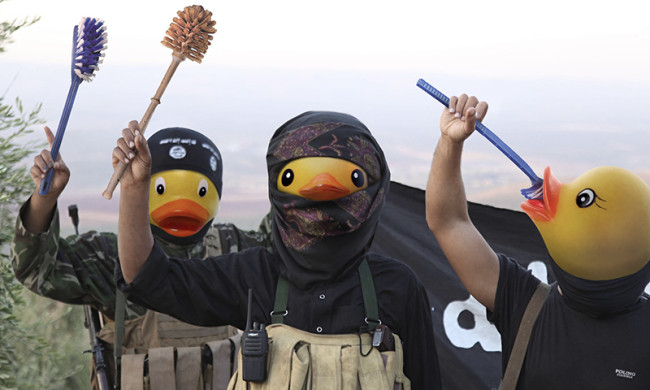 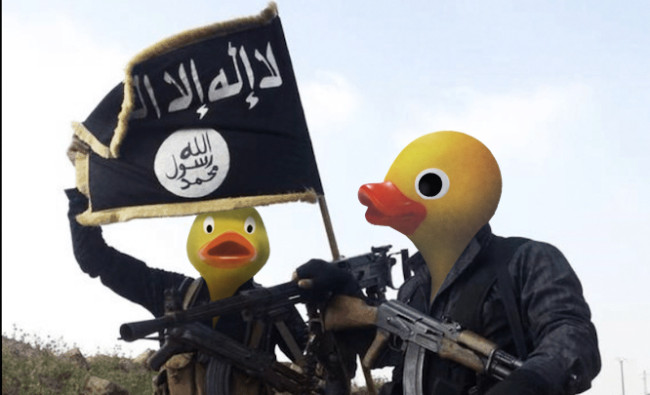 You can find many more here.

There is even better Satire

My favourite simply has to be this. Somebody took one of their propaganda clips and added in some quite hilarious subtitles …

Weapons of the mind

The primary weapon they deploy is not guns and bombs, but rather is an ideology that is designed to ensnare the gullible with a call that beckons people seeking a cause and a place to belong. Once ensnared, it traps by locking them in with a psychological dependence that plays on human emotions. There are many who are friendless and discontented with their lot, and so these are people who feel within themselves the need to rebel. Groups like ISIS leverage that by giving these rebels without a cause a rebellion that they can sign up for.

Often those who then deploy violence, do so because of deep seated insecurities that motivate them to act as they do so that they can be accepted and become, perhaps for the first time in their lives, supposedly important and also accepted by the religious cult.

Stripped down to its raw essentials the actual ideology is simplistic and engages at an emotional level, so it bypasses any form of rational thinking.

You can’t fight this ideology by simply bombing it, that only adds fuel to the fire, creates martyrs, and instills within the cult members an even deeper commitment because it bestows upon them the illusion of being players of special significance on the international stage.

Instead of the deployment of arms, we should mock and laugh at both them and their ideology. In the end this is truly the only response that it really merits, for they have signed up to pour out their lives for a delusion of no real significance at all.