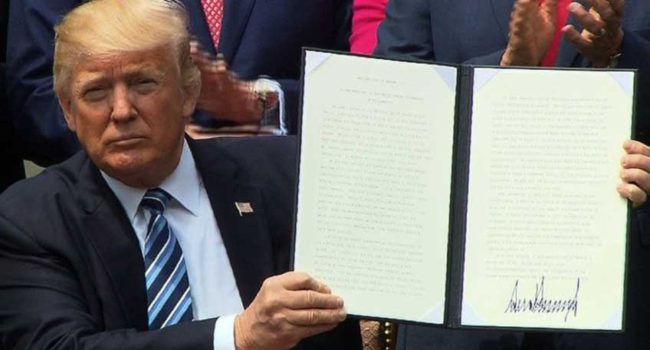 Trump had promised to reward the religious right with special privileges for voting for him. For example back in February we have USA Today reporting that Trump had assured them that he would …

“totally destroy” the law that prohibits churches from engaging in political activity, a move that would upend 63 years of settled tax law.

In an appearance at the annual National Prayer Breakfast, Trump said he would make good on his promise to overturn the so-called Johnson Amendment, which bans public charities — including churches — from campaigning for or against a candidate for elected office. Those who do risk losing their tax exemption.

“Among those freedoms is the right to worship according to our own beliefs. That is why I will get rid of and totally destroy the Johnson Amendment and allow our representatives of faith to speak freely and without fear of retribution,” Trump said. “I will do that, remember.”

Last week he fulfilled that promise with the signing of a new executive order. As reported by CNN …

… and of course the right-wing press hailed it as yet another promise kept.

One small flaw – its all bullshit, and was an act designed to craft the illusion of action, but did nothing at all.

What is the Johnson Amendment?

It is first worth understanding what the Johnson Amendment actually is.

This is a piece of tax legislation that was enacted in 1954.

Imagine if you will a world where you can give vast sums of money to a specific university or a church. In return the influential leaders of that church or university from a position of authority then officially endorses your election candidate. This would in effect be a backchannel financial pipeline that would remain hidden. Churches do not have to open up their accounts, hence this flow of tax-deductible cash in exchange for support would remain hidden and secret. The Johnson Amendment stops this from happening.

To be specific, it prohibits all 501(c)(3) non-profit organizations from endorsing or opposing political candidates. The precise wording  in paragraph (3) of subsection (c) of section 501 of the Internal Revenue Code reads as follows (and the Johnson amendment is the bit he added in bold text) …

(3) Corporations, and any community chest, fund, or foundation, organized and operated exclusively for religious [ . . . ] purposes [ . . . ] no part of the net earnings of which inures to the benefit of any private shareholder or individual, no substantial part of the activities of which is carrying on propaganda, or otherwise attempting, to influence legislation (except as otherwise provided in subsection (h) [relating to certain expenditures by charities to influence legislation]), and which does not participate in, or intervene in (including the publishing or distributing of statements), any political campaign on behalf of (or in opposition to) any candidate for public office.[3]

But don’t some of them do that anyway?

Well yes, but not in exchange for cash. Remember, this is tax law, and not a speech law. The point of this is to stop tax-deductible donations being channelled into political campaigns.

Nothing in the law actually prohibits them discussing moral or political issues, and so common sense is applied. If a pastor stands up and recommends a vote for Trump … no problem. If however he does that in exchange for a tax-deductible donation, also not a problem, except that he (or she) breaks that bit of tax law and so will cease to be recognised as a 501 compliant organisation by the Internal Revenue.

So did the executive order signed on 4th May “totally destroy” the Johnson Amendment?

In one simple word – no.

The full text of the order is here, you can read it and find out that what he claimed and what he actually did are distinctly different.

Take special note of this specific part within section 2 …

In particular, the Secretary of the Treasury shall ensure, to the extent permitted by law, that the Department of the Treasury does not take any adverse action against any individual, house of worship, or other religious organization on the basis that such individual or organization speaks or has spoken about moral or political issues from a religious perspective, where speech of similar character has, consistent with law, not ordinarily been treated as participation or intervention in a political campaign on behalf of (or in opposition to) a candidate for public office by the Department of the Treasury.

… that however is exactly where things stood prior to the signing of this executive order. The Johnson Amendment specifically prohibits endorsing or opposing specific candidates in exchange for cash, but as I mentioned, says nothing at all about inhibiting speech concerning political issues.

NEW YORK — After careful review of the executive order covering the Johnson Amendment signed by President Trump today, the American Civil Liberties Union has determined not to file a lawsuit at this time.

“Today’s executive order signing was an elaborate photo-op with no discernible policy outcome. After careful review of the order’s text we have determined that the order does not meaningfully alter the ability of religious institutions or individuals to intervene in the political process. The order portends but does not yet do harm to the provision of reproductive health services.

“President Trump’s prior assertion that he wished to ‘totally destroy’ the Johnson Amendment with this order has proven to be a textbook case of ‘fake news.’

This executive order is simply smoke and mirrors. It is a bit of political theatre that is designed to craft an illusion of progress and promises being kept, but contains no substance at all. It was designed to pander to his religious right supporters but not actually do anything.

A summary document distributed claimed that the executive order would alleviate the burden of the Johnson Amendment, which “prohibits religious leaders from speaking about politics and candidates from the pulpit” … er … except that is not actually true at all.

All we have is an executive order that directs tax officials to do exactly what they do now.

What the executive order does do is to hint of battles yet to come. Section 3 reads …

The Secretary of the Treasury, the Secretary of Labor, and the Secretary of Health and Human Services shall consider issuing amended regulations, consistent with applicable law, to address conscience-based objections to the preventive-care mandate promulgated under section 300gg-13(a)(4) of title 42, United States Code.

This clause simply passes the buck to others to put in place regulations at some future point in time that would enable people to play the religious beliefs card as justification for healthcare exceptions, but right now changes nothing.

The Johnson Amendment is part of US tax law. The executive branch of government can’t legally issue an executive order to actually change tax law, only Congress can do that. If Mr Trump attempt to do that, then as soon as it gets challenged in court (which is what the ACLU would do), then it would be immediately struck down in a manner similar to some of his other executive orders.

The promise to “totally destroy” the Johnson Amendment was not simply a broken promise, it was never going to actually happen, because he never had the power to actually do that. He might indeed like simple answers and believe that all it takes to get things done is a firm hand on the tiller. He is now finding out the hard way that this is just not how things work. He did not know this because he has had no previous political experience at all.