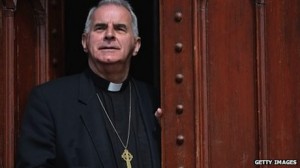 The cardinal who was forced to resign by the pope has now admitted in a statement that his sexual conduct ‘fell below standards’.

O’Brien was forced to resign last week by Pope Benedict XVI, barely 36 hours after the Observer disclosed that three serving priests and a former priest were accusing him of “inappropriate acts” against them nearly 30 years ago, in a formal complaint to the pope’s ambassador to the UK.

The cardinal had “contested” those allegations, while his officials said he was taking legal advice.

But now O’Brien has effectively admitted he had been breaching the church’s strict rules on celibacy and its bar on homosexuality since he became a priest – and during his 10 years as a cardinal.

It was alleged that some of these incidents were “drunken fumblings”. One case reported by the Observer involved repeated sexual contact.

On Friday, there were claims that complaints had been made to the nuncio, Archbishop Antonio Mennini, by a fifth priest last year, about an alleged incident in 2001.

It is perhaps Damian Thompson, the Editor of Telegraph Blogs and a columnist for the Daily Telegraph, who nails it best . To place him in context, he used to be Editor-in Chief of the Catholic Herald and remains a director there. He writes in the Telegraph …

And what are we supposed to make of this? “In recent days certain allegations which have been made against me have become public. Initially, their anonymous and non-specific nature led me to contest them.”

Sorry, I don’t follow the logic. The Cardinal must have had a good idea who was making the claims, and what behaviour was involved. You can’t contest allegations, as he did, just because public ignorance of the charges leaves you a certain amount of breathing space.

You’ve been exposed as a hypocrite, Keith Patrick O’Brien. Possibly a liar as well. Don’t kid yourself that this evasive statement will bring matters to a close.

Indeed yes, the real problem here is that when you embrace a belief that dictates one distinct “truth” that contradicts reality, then the inevitable conflict will often play out like this. O’Brien is perhaps as much a victim here and deserves, not chastisement, but pity. We can observe that as this Shakespearean tragedy has unfolded, it becomes clear that he has not only devoted his entire one unique life to an irrational belief that motivated him to rage against gay marriage with an unequalled ferocity, but has left him in complete denial of his own sexuality – now that is tragic.

Is this one unique example? Apparently not, the Pope’s resignation was allegedly related to the activities of a cabal of gay bishops cavorting around the Vatican, so the stench of hypocrisy is becoming truly risible. One can only wonder if the new Pope will simply dump their institutional homophobia over the side and welcome married priests, including gay marriage … nope, not going to happen, common sense and basic decency was never their strong point.