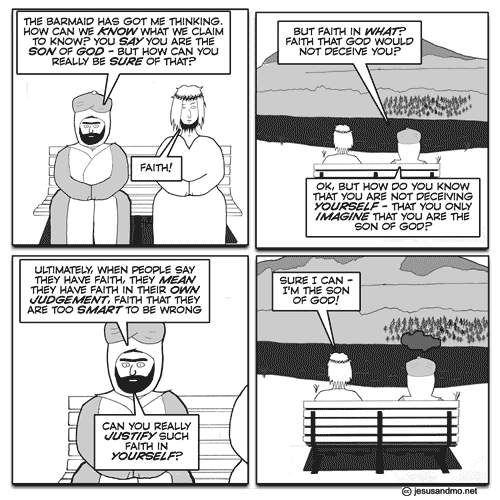 Michael Nugent of Atheist Ireland has reported today that Senator Jim Walsh of Fianna Fail made the following sweepingly inaccurate comment about Atheist Ireland and also about atheists in general when he was speaking on the floor of the Irish Parliament.

“We’ve got a lot of representations from liberal groups, and particularly Atheist Ireland, and I want to say that, I said in the past here, I think, that atheists, like people of belief, are people of faith. It takes faith for anybody to believe there is a God, and equally it takes faith to believe there is no God. And in many ways I feel reassured by Atheist Ireland because, if there wasn’t a God, well then there wouldn’t be anything particularly to atheate from, and I’d just like to say that.”

Michael then goes on to make the observation, that he made the above comment during a debate on a Bill that aims to reduce religious discrimination … and yet here he is applying his own religion to that debate and using it to discriminate … (face-palm). He also makes it abundantly clear that Atheist Ireland had proposed quite rightly that the state needs to remain neutral and be neither religious nor nonreligious … and yet here he is babbling away about his irrational beliefs and applying them to state business.

So anyway, I wanted to add a few additional thoughts to the above old chestnut that appears to pop up on an all too frequent basis from those of a religious disposition, namely the claim that … “it takes faith to believe there is no God”

(Oh and yes, this is perhaps about the right place for you to toss a few well-known anglo-saxon phrases in Senator Walsh’s direction).

Now, I do confess that I am rather fond of Peter Boghossian’s definition of the word “faith”, he defines it as pretending to know things that you do not know, and so if we apply that understanding to Mr Walsh’s claim, then it becomes rather abundantly clear that he is talking complete and utter bollocks.

There is no requirement to pretend to know that there is no god, because the wholly rational atheist conclusion rests rather firmly upon the observation that those that assert god claims never ever offer any evidence – in other words, there is no “faith” required to dismiss such claims, just common sense, which apparently in Mr Walsh’s case is apparently a rather rare commodity.

2 thoughts on “Clueless Idiot of the week: Senator Jim Walsh of Fianna Fail in Ireland”