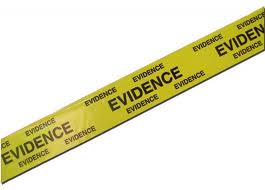 A “You don’t need evidence” claim appears to have been doing the rounds on Islamic sites, and so courtesy of the wonders of cut-and-paste, you will find it popping up these days. I spotted it today … again! … and so felt it appropriate to blog a quick response to illustrate just how utterly insane and silly it is.

First, where does it originate from, in other words, who is the alpha stupid?

It comes from a DawahFilms YouTube clip from last November.

There are supposedly two primary reasons for rejecting the claim that “evidence is required for God in order to believe” or rejecting the question “can you provide evidence for the existence of God?”. Apparently  the first is “minor” whereas the second is his “major” reason, and I have no idea why, they are both daft. Right then, lets take a peek …

Many contemporary atheists have a narrow view of what constitutes as evidence, meaning, they take it to imply that evidence is only of an empirical nature (noticeable by the 5 senses and scientifically warranted). They also seem to believe that all things require evidence to be believed. Given this, their claim/question of evidence for God’s existence is non-sensical and insincere since they know that Theists believe in a non-physical entity that cannot be detected by these methods. I also charge most contemporary atheists with the accusation that they would never accept anything as evidence for the supernatural because they believe that it will eventually be explained naturally in the future (“Naturalism of the Gaps” Fallacy). Since they already assume natural conclusions for all phenomena, the question is essentially non-answerable, therefore suggesting that most contemporary atheists are not really as open-minded as they claim and rather hold to an unquestioned dogma of epistemology.

There is indeed stuff in the above that leaves me thinking WTF!! … is he really that daft? Apparently he is, he actually believes it.

He really does not get it … if you cannot measure or detect something and if you have exactly zero evidence … then the only “dogma” (that’s a religious word) is his irrational claim. OK, lets move on.

This is apparently his “big” reason …

It has been proven recently in the past few years that supernatural thinking is normatively (not universally) natural to human beings. In this case, I claim that since the same rational faculties that make up this interpretation of the world around us (that there is purpose, agency, design, etc.) are those that also lay the foundations for basic scientific inquiry (cause and effect, evidence, etc.), it is irrational to question these faculties and to suggest that we need evidence for belief in God when this too calls into question evidence for our ideas about science and the physical world around us. If we question one aspect of our rational faculties then we must logically allow ourselves to question other aspects, which leads us into absurdity and doesn’t allow us to consider anything knowledge at all.

To insist that naturally disposed beliefs are somehow “irrational until proven otherwise” is essentially the same as questioning the very reality we live in in totality, and therefore destroys our conception of “evidence” as well.

Sigh! … sorry, I should have warned you to put your coffee down, you have just splattered it all over your screen now, right?

The essence of his daft claim is this …

Our minds do indeed naturally lead to supernaturalism, but that does not mean any of it is actually true. In stark contrast, the scientific method fully recognizes how easy it is to be fooled and to fool others, so it has evolved over many years a whole host of things to prevent that from happening… peer-reviews, tests, double-blinding, etc…

Impressed? Nope, neither am I. the only people being fooled here are the believers who think this is a rational argument.

A Bit more about DawahFilms

To give you an idea about who DawahFilms are and what they are about, they have recently been going head-to-head with a few folks. Here below is thunderf00t talking about them. He also blogs about them here …where we learn that “Da-Waaaah-films actually enjoys taking part in lynch parties with his muslim friends” … no kidding. Thunderf00t posts screen shots of actual threats of physical violence from these kooks.

Dawahs Law: When an individual is such a professional jerk, that it is impossible to distinguish them from a troll pretending to be an utter jerk merely by what they say.

Here is Thunderf00t on YouTube talking about them Doc Dropping him. If you are not familiar with that term, then let me spell it out … that is where somebody obtains and then discloses personal information in public. In this context it is a big deal, an Islamic kook, posting details of folks who criticize Islam is a real and serious threat, it is telling his buddies who to go and murder and where to find them.

In my book, that makes them truly vile and utterly evil.