An article today in “Politics Daily” grants us an insight into the battles that Christopher Hitchens currently has to endure. 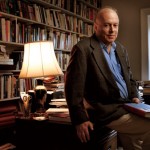 Unrepentant despite the ongoing ravages of esophageal cancer and the chemotherapy that is supposed to keep it at bay, atheist and controversialist Christopher Hitchens is vowing to “continue to write polemics against religious delusions, at least until it’s hello darkness my old friend.”

Not only does he have to endure the ravages of the illness itself, but also the onslaught heaped upon him by “loving” believers who swarm like a flock of vultures to kick and prod him when he is down and at his weakest …

One of the delusions he targets in his regular column in the latest edition of Vanity Fair magazine is the notion that the cancer is divine retribution for his irreligious spoutings, and in particular a punishment aimed at his voice, which has for years been the famously plummy medium for many of his heresies.

And he issues a “prebuttal” to assure both his foes and his many fans (some of them believers) that even if his voice survives to his deathbed, they shouldn’t believe any reports of a last-minute change of heart.

“As a terrified, half-aware imbecile,” Hitchens writes, “I might even scream for a priest at the close of business, though I hereby state while I am still lucid that the entity thus humiliating itself would not in fact be ‘me.’ (Bear this in mind, in case of any later rumors or fabrications.)”

As he often does, Hitchens picks out the cartoonish views of one of the uglier believers to comment on his illness in order to set up his deconstruction of faith.

Pay attention now, this is the bit where we get to see true Christian virtues such as compassion and kindness, then again perhaps not …

He quotes one anonymous believer as commenting: “He’s going to writhe in agony and pain and wither away to nothing and then die a horrible agonizing death, and THEN comes the real fun, when he’s sent to HELLFIRE forever to be tortured and set afire.”

Does Chris respond with a rant or with scorn? Not at all, instead we find a calm thoughtful analysis …

Hitchens coolly analyzes the scorching condemnations of such religionists and lists the rational objections to them, most of which would in fact be shared by any thoughtful Christian, or at least those humble enough not to be “so damn sure that he can know the mind of god,” as Hitchens puts it.

“Second,” he continues, “would this anonymous author want his views to be read by my unoffending children, who are also being given a hard time in their way, and by the same god? Third, why not a thunderbolt for yours truly, or something similarly awe-inspiring? The vengeful deity has a sadly depleted arsenal if all he can think of is exactly the cancer that my age and former ‘lifestyle’ would suggest that I got. Fourth, why cancer at all? Almost all men get cancer of the prostate if they live long enough: it’s an undignified thing but quite evenly distributed among saints and sinners, believers and unbelievers.”

“If you maintain that god awards the appropriate cancers, you must also account for the numbers of infants who contract leukemia. Devout persons have died young and in pain. Bertrand Russell and Voltaire, by contrast, remained spry until the end, as many psychopathic criminals and tyrants have also done. These visitations, then, seem awfully random.”

The rest of the article is also worth reading, click here to do so. You might then also like to read Hitchens own article “Unanswered Prayers” in Vanity Fair where he talks about all this and all the other folks who write to say that they are praying for him, and what his thought as an atheist are about all this.

As for myself, I have no magical incantations to offer up to a non-existent supernatural being. What I do know is that Hitchens is now, and will continue to be in both my thoughts and the thoughts of many others who only wish the very best outcome, so I salute both him and his courage as he continues to be a true inspiration for many during this personally difficult time.