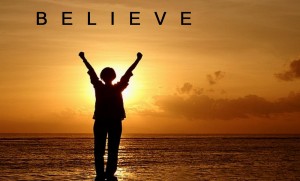 The beating heart of modern science is skepticism, or to be more precise, Scientific Skepticism.

This essentially means that when presented with a claim, is it not simply accepted, no matter who said it or how profound it might be, but instead you challenge the idea and ask if there is verifiable evidence that confirms it. This manifests itself in many ways, for example as part of the peer-review process – does the data in this proposed article confirm the conclusion, is there a better explanation, do I have enough detail here to be able to reproduce this result, etc..

In stark contrast, ‘belief’ demands that you just accept a claim, and often belief will go as far as portraying those who dare to doubt and demand evidence as the bad guys.

If we operated on the basis of pure faith, just think where it would take us; sure Bigfoot is real, yes a monster really does exist in Loch Ness, oh and let’s not forget that the airspace over the US is incredibly congested each night with Aliens that are studiously busy kidnapping a vast proportion of the population. Can I sell you a bomb detector perhaps and please ignore the fact that it contains nothing inside, its a snip at $30,000, oh and here are some magic pills that will make you better, also remember to please ignore all that medicine being dispensed by doctors because that will kill you.

Am I being a bit too simplistic?

Perhaps I am, because it is not quite as simple as “accepting everything” vs “believing nothing you are told”.

The reality is that we all have different degrees of certainty about different things. For example, do you truly believe that the sun will rise tomorrow morning? You have a high degree of confidence that it will do exactly that because of your experience from every previous day. It has indeed consistently risen and moved across the sky, so you can be highly confident that it will do the same tomorrow. This is a belief that is founded upon evidence, and it can also be easily tested, so it is reasonable.

Do you believe that there really is a country called Bhutan? If I told you and you had never previously heard of it, then you might indeed doubt, but how much doubt would you have? If you have had a previous experience of me telling you things that were you true, in would be valid for you to not believe, but if I generally told you things that you later verified to be true, then you would probably believe me.

Our ability to believe and operate on “faith”, and by that I do not mean the religious variety but the normal acceptance of guidance and advice that enables you to function on a daily basis, is very much a sliding scale of degrees of certainty  Where we go on that scale for various things will very much depend upon our previous experience and also our cultural heritage. (When I say “cultural”, what I’m getting at is our ability to take a cue from those around us and crowd source where we sit on the scale)

It has to be like this because we cannot operate without tapping into our own personal experience and also taking such social cues, the alternative of doubting everything until you personally verify would mean then you could not operate normally. It is of course a reasonable thing to do, I may not personally comprehend the precise physics behind some technology, but I can have an appropriate degree of confidence in it. Additionally, if I was sufficiently curious, I could sign up for some courses and learn the details, and would not be denounced for conducting such an inquiry.

So where does Religion fit in?

Religious beliefs that thrive today do so because they have been naturally selected for their ability to tap into human psychology and leverage it. This enables “belief” to thrive and to also propagate itself. Because such belief itself is not actually true at all, it survives by tapping into our normal human mode of operating in which we accept specific things as true as a short cut to enable us to function.

When all around you tell you it is true and warmly assure you it is true, it is quite natural for you to follow that cue and go along with it.

Religion goes a bit further to preserve itself. It tricks people into thinking that “belief” holds the high-moral ground, and so insulates itself from criticism. The net effect is that any doubting or questioning is perceived as an argument against morality and so it faces a considerable degree of resistance, thus “belief” also taps into our natural human empathy to be decent and honourable.

It gets even more complex

There is no one true version of a specific belief, instead each and every human has different degrees of confidence with the various aspects of the belief they adhere to. For some it is simply a social club, a place to meet friends and the price they pay is polite toleration of the boring religious bits, for others there is some truth, and if asked would confirm that they embrace some sub-set of the official beliefs. Perhaps there is a god and Jesus spoke to him, but virgin birth or walking on water … nah. Yes Allah spoke to Mohammed, but Jinn’s are not real and flying donkeys are just quaint stories that are not actually true.

The Tragedy of belief.

Where things go horribly wrong is when humans fully embrace a belief as literal truth, and just accept it all without questioning any of it.

This is not a rational position, but is instead is a deeply emotional one, and usually no amount of rationality can penetrate it. If you robustly debunk the daft claims made, the inner thought is one in which such arguments are dismissed as wrong, and perhaps deemed to be a test of faith. Such individuals are usually too heavily invested both socially and emotionally, and too deeply ensnared by the psychological trap to be reached.

Humans are generally driven to strive to do the right ethical thing, but when the belief tells them that the right moral things include intolerance of those that do not accept the belief, misogyny, violence towards those who dare to criticise the belief, and the murder those who quit the belief, then we all have a huge problem.

When faced with tragic events such as Woolwich, it is perhaps a tad simplistic to dismiss the perpetrators as fanatics and not representatives of “true” Islam. The problem with that dismissal is that there is no such thing as “true” Islam, instead there is a considerable degree of conflicting thoughts and beliefs, of which some variations, a rather deadly type, have been embraced as literal truth.

So while most Muslims are indeed equally horrified by what happened and happy to denounce such thugs, they need to come to terms with the reality of what can happen when you become deeply ensnared by a belief that is not actually true at all … a variation of which they themselves also embrace as “truth”, but not to the same degree.

It is easy to be fooled

It is frighteningly easy to be fooled into thinking that something is true, especially if it appears to make sense, and you also think that you have personally verified it. Earlier on I talked about the certainty that the sun will indeed rise tomorrow, so let me ask you once again if you are sure that this is true? Everybody around you tells you it is so, and you have also personally seen it happen, so are you still sure? It appears to be insane to suggest that it is not true, but I can assure you that the belief is false, the sun will not rise tomorrow morning. The belief that it will rise is an illusion, the actual reality is that earth rotates.