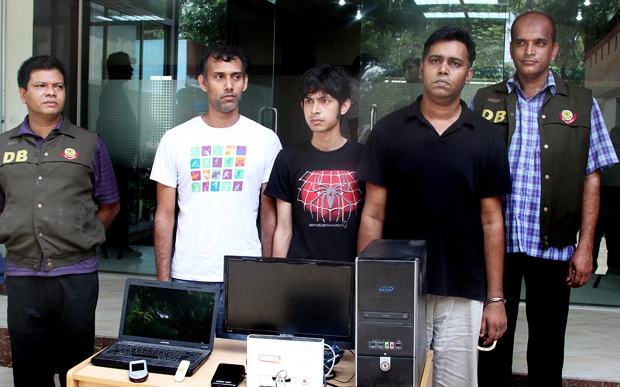 A group of four writers have been arrested in Bangladesh and will stand trial in November. Their crime? They have been accused of publishing material that “causes hurt to religious beliefs”

In the picture on the left, the three bloggers pictured in the middle are Subrata Adhikari Shuvo, Mashiur Rahman Biplob and Russel Parvez. Asif Mohiuddin was also arrested but is not featured in this photo. The guys on the extreme left and extreme right are DB (Detective Branch)

The Rationalist Association in the UK has the details with links back to other news reports, here is an extract …

The bloggers, who were first arrested in April, will now face up to 14 years imprisonment and hefty fines. They are the first people to be tried under the country’s new Information Technology Act, which bans the publication of online material that “causes hurt to religious beliefs.”

The Metropolitan Sessions Court in the country’s capital Dhaka decided yesterday that the bloggers will face trial in November. Asif Mohiuddin, Subrata Adhikari Shuvo, Moshiur Rahman Biplob and Rasel Parvez are free on bail at the moment after spending almost three months in jail. They pleaded not guilty at the hearing on Sunday, and petitioned forthe charges to be dropped. The court nevertheless rejected the petitions and ordered the trial to begin on November 6. The evidence given by the police on Sunday claimed that the derogatory posts of the four bloggers caused “a slide in law and order that led to anarchy.”

The bloggers were arrested amid heating tensions between Bangladeshi Islamists and anti-Islamist activists. In February, a blogger critical of Islam and the country’s largest Islamist party Jamaat-e-Islami was murdered.

You would have thought that Allah would be would be capable of “punishing” them in his own good time, but no for some reason he needs earthly thugs to interpret and carry out his wishes. In response, I have a few words for the authorities in Bangladesh … “hey guys, your Mohammed is a violent intolerant misogynistic paedophile” … so have I “hurt” your religious feelings yet?

Actually, the above is factual criticism …

So when it comes to the idea that criticism of bad ideas has “hurt” religious beliefs, the fact that these thugs in Bangladesh have arrested Subrata, Mashiur, Russel and Asif has in effect done a great deal more to generate “hurt” feelings because it has thrown an international spotlight upon their intolerant batshit insane religious beliefs; many such as myself are now blogging about this – the arrest and trial has caused a considerable degree of real harm to the reputation of Bangladesh.

2 thoughts on “Why has Bangladesh gone crazy and started locking up bloggers?”