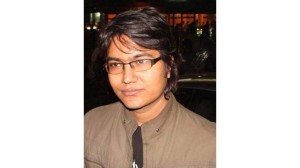 Bangladesh blogger Asif Mohiuddin was brutally stabbed by the Islamists, and then arrested for the crime of being an atheist.

He was let out on bail on 27th June and had applied for permanent bail, but the Dhaka Tribune now reports …

Asif appeared before the court earlier in the day and sought permanent bail as his one-month bail period ended on July 27.

On June 27, another Dhaka court granted Asif bail for one month.

He was detained on April 3 this year for allegedly violating information, communication and technology laws.

So what are we to make of this? It says a great deal about the insanity and pure immorality of belief, and the rampant corruption within Bangladesh.

Taslima Nasreen, an award-winning writer, physician, secular humanist and human rights activist from Bangladesh, and also in exile because of her powerful writings on women oppression and unflinching criticism of religion, and multiple fatwas calling for her death has a distinctly clear insight, she wrote this last April when Asif was first arrested …

Does the government try to prove that Asif is as guilty as the Islamists who tried to murder him?
Asif wrote blogs expressing his thoughts on atheism, secularism and humanism. He did not kill anyone in the name of atheism. He asked no one to kill anyone to save atheism. He used his keyboard or pen to tell the truth. Islamists nearly killed Asif with knives. The government of Bangladesh thinks there is no difference between Asif, the freethinker and a bunch of murderers.
Prime Minister Sheikh Hasina was a soft-core Islamist. She is now trying to be a hard-core Islamist. She is helping the Islamists for their dreams–of turning Bangladesh into a fundamentalist country–come true.
Sheikh Hasina has been preventing me from entering my country because I am an atheist and a feminist. She put enlightened bloggers in prison because those bloggers do not believe in God.
‘What is the difference between Islamists and Sheikh Hasina?’ I asked.
A friend of mine said, ‘the difference between Islamists and Sheikh Hasina is that Islamists do not pretend to be secular.’

The fact that a blogger has been jailed for the deployment of reasonable fact-based criticism says a great deal about Bangladesh’s supposed secularism and Islam, it is not a judgement against Asif, but is in fact a judgement that identifies Islam as both corrupting and also intolerant.