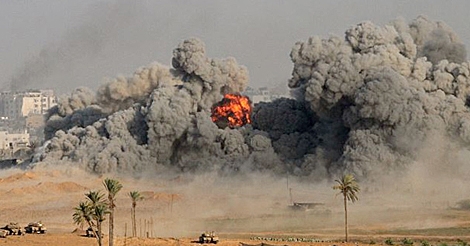 The standard knee-jerk reaction to an atrocity is to pick some almost random target in the middle east and proceed to bomb it or invade it. If you look back, clearly this has not worked out all that well … ever … and yet here we are about to embark upon more of the same, and so perhaps the one thing we learn from all this is that sometimes we simply do not learn from our past mistakes.

I think that perhaps the Franky Boyle article last Monday within the Guardian nicely sums up the pure political insanity that can kick in at times. He does have a way of putting things, for example, earlier on he points out …

There were a lot of tributes after the horror in Paris. It has to be said that Trafalgar Square is an odd choice of venue to show solidarity with France; presumably Waterloo was too busy.

Ah yes, he does has have entertaining way with words, and I’m including within that thought the times when most of them are four lettered ones.

So anyway, his well-put point is this …

if you’ve got a massive fight in, say, a pub car park, the best way of solving it is clearly standing well back and randomly lobbing in fireworks. You can’t get rid of an ideology by destroying its leaders; you’d think if there’s anything “Christian” countries should know, it’s that. Europe has rejected the death penalty on moral grounds, and yet we relax this view when it comes to a group who want to be martyred.

Or to distill that down even further, you can’t bomb bad ideas out of existence, especially when your target consists of those that actually want to be bombed, and relish the idea of the apocalypse as a core part of their belief.

ISIS is what it is and where it is for many reasons. Yes, there has been a dire drought in the region that has wiped out the livelihood of many and left 25% unemployed, and while that is not a root cause, it has to some degree contributed. Yes, the variation of Islam they embrace is indeed ultra extreme, and has flourished because others have financed and promoted such thinking for decades (thank you Saudi Arabia for spending $100 billion since the 1970s to promote such extremism). We also have a political reality in which the Sunni’s have been left out in the cold by the power grab in the region by others, and yes it has also all been one long history of corrupt and abusive dictatorships. We might indeed look upon all this and much more, and then claim, “not our fault”, but we have also played a part. Bombing the previous dictator into dust and then walking away left a huge vacuum, and so ISIS have rushed in and promptly filled it …

… and so the go-to answer we now reach for is, “Hey let’s bomb them”, while happily forgetting how well that worked out last time around.

Ask yourself this – let’s suppose we totally defeat and annihilate ISIS. After the dust has settled, what exactly happens next? Will there emerge a decent free society, or will the next gang of religious thugs waiting in the wings leap in? (Hint: No psychic power required to see the next act within the oppressive miserable play).

I have no easy solutions to offer, but can see that embarking upon yet more military action is not exactly a cool headed well thought out move to go for.