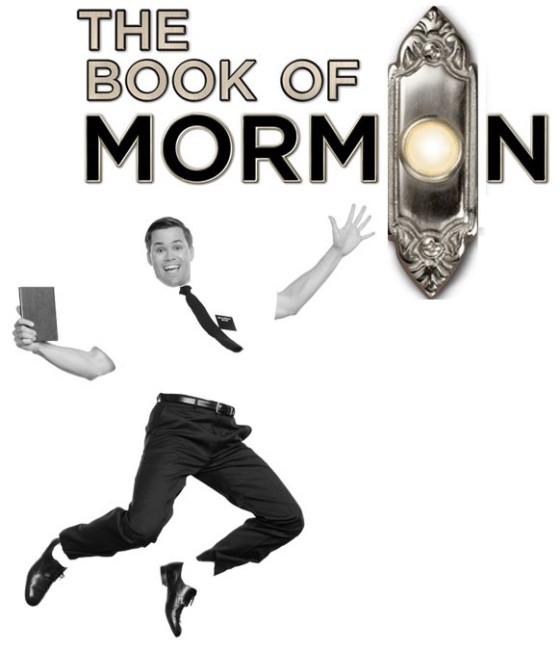 The Amazon review system is one that often cries out for parody and humour to be deployed, or perhaps even simply “truth”, and so it should perhaps come as no surprise to learn that a rather heated war has broken out within the reviews of the Book Of Mormon on Amazon.

So far, (at time of writing this), it is a split of 41% 5 star reviews and 55% 1 star reviews, and because they were falling behind, an official request went out from a Mormon Bishop to a Mormon Young Singles group to quickly leap in and start reviewing (but has been very quickly taken down again). Here it is anyway … 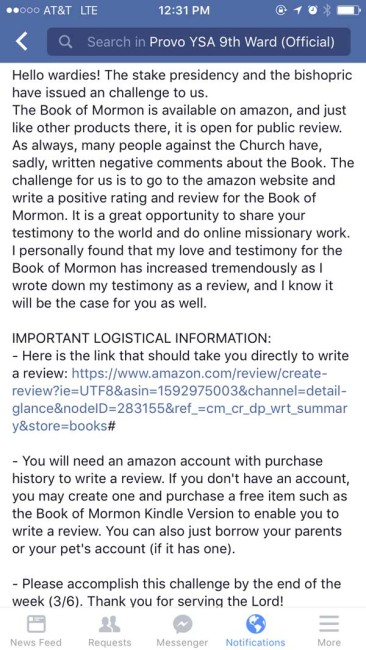 Now you might perhaps be wondering if Amazon have rules against posting reviews for your own product, and yes, of course they do. Rule Number 1 reads …

1. Can I write a Customer Review of my own book?No. You can’t write a review of your own book, but there are other ways to communicate with your readers on Amazon. Please visit our Author Central Help Page to learn how to benefit from the ‘Book Description,’ ‘Editorial Reviews,’ and ‘More About the Author’ sections of your book’s detail page.

… and so clearly the idea of amazonian ethics is being happily ignored because good reviews are desperately needed.

Some Sample Book of Mormon reviews

They are, as you might anticipate, hilarious, and so here are a few of my favourites.

The most popular one star review reads …

A trite, misogynistic, racist collection of demonstrably false stories written by a convicted con artist and peddled as Gospel truth by a masonic country club of ancient, white men who gleefully scam their ovine followers out of time, money, and critical thinking skills while infusing the Utah State Government and Congressional Delegation with hyper-religious special interest puppets, whose utter lack of spiritual value might be forgivable were it not for its complete dearth of literary merit. Unless you are moving to rural Utah under a witness protection scheme or writing an exhaustively comprehensive history of American cults, you have no valid reason to purchase, borrow, steal, or pick this book up out of the gutter with any intention other than immediately depositing it into the nearest trash receptacle.

… and under that, one commenter asks “So you don’t like it?“, and another writes, “I used to be a Mormon. I agree with the review.“.

The next most popular one star reads …

Then we have this 5 star review …

I bought this on the recommendation of a nice man who came to my door. While I did have to wait a long while for delivery, it was in many aspects worth the wait. From cover to cover, this book offers a rich world of fantasy and magic, with Gods and demons running amok in a medieval setting. Jesus Christ, the lead character was amazing, a gifted and super powerful wizard. He could not only do transformation magic but could raise the dead as well. I mean the only thing missing from this book, was a kick ass dragon for the lead character to ride on. My only gripe with this, was that it was in a style of hundreds of short stories and trying to follow the plot was tiresome at time; this is the reason for the mark down in stars. IF you liked Harry Potter, you will love this; it’s about your level and magic as a bonus :D

It is not (yet) the most popular, but I think this one is the best … and indeed yes, why write a new review when Mark Twain’s 1861 review still stands .. (It is long, very long, so I’ve abridged it) …

MARK TWAIN gives this thoughtful & funny review of The Book of Mormon:

“All men have heard of the Mormon Bible, but few, except the elect have seen it or at least taken the trouble to read it. I brought away a copy from Salt Lake. The book is a curiosity to me. It is such a pretentious affair and yet so slow, so sleepy, such an insipid mess of inspiration. It is chloroform in print.

If Joseph Smith composed this book, the act was a miracle. Keeping awake while he did it, was at any rate. If he, according to tradtion, merely translated it from certain ancient and myteriously engraved plates of copper, which he declares he found under a stone, in an out of the way locality, the work of translating it was equally a miracle for the same reason.

The book seems to be merely a prosey detail of imaginary history with the Old Testament for a model followed by a tedious plegiarism of the New Testament. The author labored to give his words and phrases the quaint old fashioned sound and structure of our King James translation of the scriptures. The result is a mongrel, half modern glibbness and half ancient simplicity and gravity. The latter is awkward and constrained, the former natural, but grotesque by the contrast. Whenever he found his speech growing too modern, which was about every sentence or two, he ladeled in a few such scriptural phrases as, “exceeding sore,” “and it came to pass,” etc. and made things satisfactory again. “And it came to pass,” was his pet. If he had left that out, his bible would have been only a pamphlet.

… he then goes into a lot of detail, all laced in the Twain style, and finishes with this gem …

Seems a pity that he didn’t finish for after all his dreary former chapters of common place he stopped just as he was in danger of becoming interesting.

The Mormon Bible is rather stupid and tiresome to read. But there is nothing vicious in its teachings. Its code of morals is unobjectionable. It’s smooched from the New Testament and no credit given.”