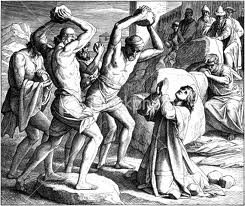 The horrendous news is that Afghanistan wants to start stoning people in public for the crime of …. (can you guess) … murder? Nope, adultery.

As reported by the Telegraph …

Afghanistan is planning to reintroduce public stoning as punishment for adultery 12 years after the Taliban was ousted from power, according to a new draft penal code.

The move has shocked human rights campaigners and will dismay donors who have poured billions of pounds into the country for reconstruction.

It will be viewed as another backwards step at the end of a year that has seen women’s rights undermined, with a slew of legislation and murders of prominent women.

Human Rights Watch called for international donors to withhold funding if the government goes ahead with the plan.

… The draft — devised by a working group led by the justice ministry, parts of which have been obtained by The Telegraph — states that unmarried adulterers should be subject to 100 lashes. If they are married, the punishment is stoning in a public place.

The is truly abhorrent, essentially stoning is a form of killing somebody slowly by torture.

So why is this going on? … well basically one single word sums it up … Islam.

According to the Hanbali jurist Ibn Qudamah, “Muslim jurists are unanimous on the fact that stoning to death is a specified punishment for the married adulterer and adulteress. The punishment is recorded in number of traditions and the practice of Muhammad stands as an authentic source supporting it. This is the view held by all Companions, Successors and other Muslim scholars with the exception of Kharijites.”

OK, so that was the 7th century and this is the 21st, so why oh why reintroduce this? Basically when a belief ensnares humans they are in the grip of a psychological delusion and will do some quite abhorrent things with the belief that they are good and moral actions. In essence, toss all logic, reason and basic human empathy out the window and instead lean upon an ancient text and you or more or less ethically and morally be completely buggered because you will end up embracing ideas that are truly bad.