There is an official US delegation attending the Climate conference in Bonn, Germany (COP23). Given that they represent a climate change denying anti-science administration, their remit is as insane as you might anticipate. As explained by the New York Times recently …

The Trump administration will promote coal, natural gas and nuclear energy as an answer to climate change at a presentation during a United Nations global warming conference this month, the White House confirmed Thursday.

Yes indeed, they will be promoting speakers from Peabody Energy, a coal company; NuScale Power, a nuclear engineering firm; and Tellurian, a liquefied natural gas exporter, who will be touting fossil fuels as the solution.

You can almost hear the sound of the jaws of delegates bouncing off the floor from here.

This of course has all been inspired by the idiot-in-chief who babbles on about “clean-coal”, and I’m not kidding about that …

It is finally happening for our great clean coal miners! https://t.co/suAnjs6Ccz

What do others make of this COP23 delegation?

Oh come now, you don’t need psychic powers to work that out. The reactions are as strong and vocal as you might anticipate, and also wholly justifiable.

“It’s embarrassing, After forfeiting international leadership on climate, the Trump White House is compounding their error with a silly stunt. Fossil fuel companies are not clean energy companies, and no amount of spin will change that.”

“Any country or company continuing to champion further exploration for and mining of coal and even other fossil fuels from now on would be willfully carrying out a crime against humanity, and they would be held accountable,”

– Saleemul Huq, director of the International Centre for Climate Change and Development in Bangladesh

What makes COP23 interesting is that there is a competing unofficial US delegation also attending.

The far superior unofficial US delegation 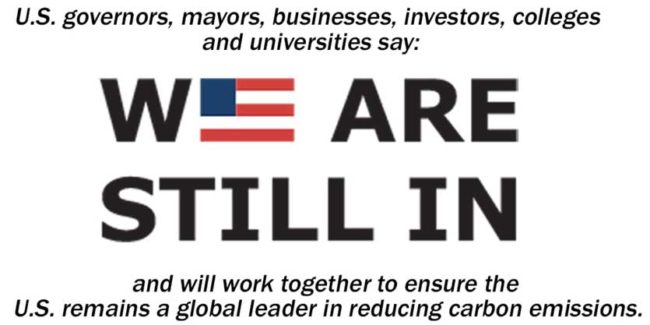 The real US delegation is an unofficial one, and I use the word “real” to indicate that this is the team that actually represents the people of the US. These are the people who are passionate, dedicated, and committed to decisive meaningful action. Under the banner of “We are Still In” they are actively participating. Composed of university presidents, mayors, state governors, and business leaders, they will be spelling out their commitment by standing in solidarity with international leaders, and showing the world that US leadership on climate change is not coming from the official US delegation, but instead from them. They represent the vast majority in the US.

Their COP23 webpage is here.

There you discover that they have setup a pavilion that they are calling the U.S. Climate Action Center. As a contrast to this, the official US delegation has nothing, and so for the first time the US officially has no pavilion.

Things kick off within the unofficial US pavilion on Thursday (tomorrow), with …

We’re Here, and We Are Still In: U.S. Climate Action Center Kickoff

In the absence of leadership from Washington, representatives of cities and states, tribes, businesses, and academia have traveled to Bonn and are standing alongside the international community to make clear that the representation of the United States extends beyond its federal government. With over 2,500 signatories representing more than 130 million Americans and $6.2 trillion of economic output, ‘We Are Still In’ is the largest cross section of the American economy yet assembled in pursuit of climate action. We invite all attendees to join them as they kick off the US non-national presence at COP 23.

It is early days, and so things are still ramping up in Bonn. California Governor Brown, is expected to arrive next Saturday (11th Nov) and is scheduled to be making a big announcement on behalf of the anti-Trump governors and mayors, called ‘America’s Pledge.’

It’s an official event on their agenda …

Special Envoy for Cities and Climate Change Michael R. Bloomberg and California Governor Jerry Brown will release a new America’s Pledge report detailing U.S. states, cities, and businesses’ climate-related actions that are keeping America on track to meet its Paris Agreement carbon reduction goals. They will be joined by a cross-sectoral panel discussion, and UNFCCC Executive Secretary Patricia Espinosa will receive the report.

Meanwhile, there are rumours that Scott Pruitt just might also make an appearance. As head of the EPA you might expect him to be on side, but as a Trump appointee he is a climate change denialist who will happily refute the science on the basis of no evidence at all.

Who Should you call?

This all creates an interesting puzzle for the other international delegates. If they wish to engage with the US, and I mean truly engage with those that actually represent US interests, then who should they interface with?

It perhaps is a decision that will be driven by a longer view of US politics.

Those that perceive the Trump administration to be simply a bump on the road that can be happily ignored, and that after the next election things will get back to normal, and that the US will not actually leave the Paris agreement, then clearly to go-to-guys will be the unofficial “We are still in” alliance led by California Governor Jerry Brown and others. If however Trump’s intent to abandon the Paris Agreement is accepted as the new direction that the US is going in long term, then Trump’s team are the folks they would need to talk to.

So how will this play out?

Most probably, the majority will simply ignore the Trump delegates and engage with the unofficial delegation who clearly do represent vast swathes of US economic interests at both a state and city level. As California Governor Jerry Brown is often fond of pointing out – if California alone was a country, then it would be the eighth largest economy in the world.

Together, the “We are still in” unofficial alliance consists of state and city political leaders that represent 130 million Americans and $6.2 trillion of the U.S. economy. As a contrast to that, the official US delegation not only takes a stance that is clearly insane and conflicts will all the prevailing guidance, but also has a very low and rapidly shrinking approval rating amongst the US public in general, so engagement with them by other delegates is most probably not a very wise long-term investment.