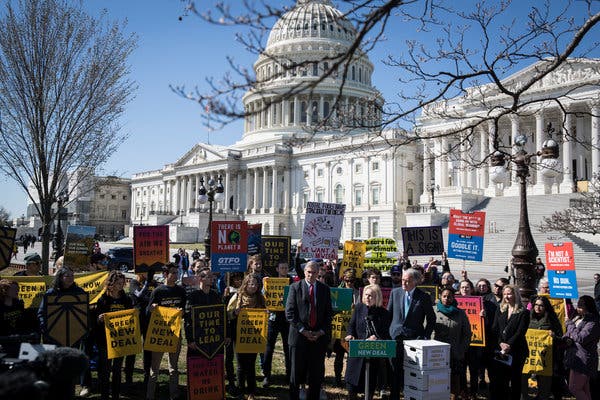 While Republicans have got absolutely nothing except denial of the well-established scientific reality of climate change and support for fossil fuels, over amongst the democrat candidates things are the polar opposite. That sounds like a deeply partisan statement; a manifestation of the current political polarisation. Perhaps it is, but it is also true. One party is taking a stance based upon evidence-based reality, and the other is quite frankly utterly delusional. So what plan is in play, what might actually happen if a democrat gets elected in 2020?

Republicans might indeed attempt to quibble about the cost for some of the various proposed plans that involve trillions $ over decades, but these same individuals did not even even blink when Trump gave the richest 1% a tax break that reduced government revenue by $1.5 trillion.

Putting all that aside, I’m asking myself one question – what are the plans that have a shot of actually getting implemented?

Perhaps the best way to gain an early view of that is via a brief review of the plans that have been presented by the top 3 candidates.

Caveat: yes it is early days, things can rapidly change. In the graph above you can see how those numbers have changed over the last six months. If I was asked to place money on one, then I’d lean towards Biden being the final candidate, but that is simply based upon the above trends.

OK, moving on, the next step is to take a peek at what the top three have in mind when it comes to actually addressing climate change.

CNN’s seven-hour Town Hall last Wednesday was not a launch platform for Biden’s thoughts, his website has been promoting the need to take drastic action for some time. (You can see it here). There you will find that he endorses the Green New Deal, and wants an 100% clean energy policy. He also seeks to rally other nations as well. He states that he will not accept contributions from oil, gas and coal corporations or executives.

Regarding the CNN debate, he appeared to be on the defensive, and rightly so because this happened …

How can he be trusted to stand up to fossil fuel companies when he has plans to attend a fund-raiser tomorrow hosted by Andrew Goldman, a co-founder of Western LNG, a liquefied natural gas production company

Mr. Biden appeared caught by surprise at the CNN climate forum on Wednesday night and countered, “He’s not a fossil fuel executive” before pivoting to his history of fighting corporate polluters. Pressed about Mr. Goldman’s role, Mr. Biden said “I didn’t realize he does that” and said he would look into whether the fund-raiser violated his pledge not to accept money from fossil fuel companies.

In one word … “oops”. To be honest, I believe him, but for most of his segment he remained on the defensive.

What he does also have is a credible track record. As part of the Obama administration, that truly does grant his proposals a good reality check.

Biden likes to say he was among the first to introduce a climate change bill in the Senate, and fact checkers generally agree. It was the Global Climate Protection Act of 1986 that was largely put into a spending bill in 1987. The Reagan administration pretty much ignored it, but the bill did call for an EPA national policy on climate change, and annual reports to Congress.

Biden was in the Senate 36 years, and he had a lifetime environmental voting score of 83 percent from the League of Conservation Voters. In 2007, he supported higher fuel efficiency standards for motor vehicles, which passed …

Bottom Line: There might indeed be things that some will quibble about but if you view it all in context then it becomes clear that he has not only a credible vision, but a history that validates and verifies it.

Prior to this week, she had made a public lands proposal and also a green manufacturing proposal. What has been added this week is that she has very much picked up Inslee’s vision – get to 100% clean energy in 10 years. The cost would be $3 trillion, half of which is achieved by reversing Trump’s Tax theft of $1.5 trillion for his 1% buddies. This would also generate many clean energy jobs.

The embrace of Inslee’s vision …

Warren sought to pick up the baton of climate leadership from Washington Gov. Jay Inslee after he ended his climate-focused run for president. She met privately with him and then adopted his aggressive multi-part action proposal. She has challenged all of the presidential candidates to make the same commitment to 100 percent clean energy, buildings and transportation. Warren’s plan calls for all new buildings to be zero-emissions by 2028, all electricity to be carbon-neutral by 2030, and all new passenger cars, trucks and buses to be zero emissions by 2030.

The Inside Climate News view is this …

Warren built her career in the Senate railing against Wall Street and championing consumer protection and economic equality. But her priorities are evolving as environmental and economic impacts of climate change increasingly merge.

On the campaign trail, Warren is increasingly taking a leadership role on climate issues, as when she became one of the first presidential candidates to sign the No Fossil Fuel pledge. When she released a detailed policy proposal in April to ban new oil and gas leases on federal lands, other candidates quickly followed suit. And when Joe Biden put out a big climate pledge, Warren was able to quickly trump him with an even bigger commitment of her own. By aligning herself with Inslee’s climate ideas, Warren clearly is making a bid for climate voters.

Bottom Line: She might indeed be fishing for the green vote, but her sincerity and passion are quite authentic. She has a credible and quite comprehensive viable plan.

This is the plan with the biggest numbers. To be specific $16 trillion over 10 years. At the CNN forum he was sharp and focused with a genuine passion …

“I’ve spent my entire life fighting for workers,” he said. “Let me be clear: The coal miners in this country, the men and women who work on the oil rigs, they are not my enemy. My enemy is climate change.”

…Sanders’ biggest legislative climate accomplishment was a national energy efficiency grant program he introduced his first year in the Senate. It passed in 2007. He successfully pushed for $3.2 billion for the program to be included in the Obama administration’s 2009 economic recovery package. The grants were the largest investment in energy efficiency and renewable energy at the community level in U.S. history…

…On Aug. 22, Sanders announced the most ambitious climate plan yet among the candidates. It promises to declare climate change a national emergency and put the Green New Deal into action by investing $16.3 trillion in a 10-year mobilization “that factors climate change into virtually every area of policy.”…

…His mobilization includes creating 20 million new jobs in clean energy, energy efficiency and technology; transforming the agriculture system for more sustainable farming and breaking up big agribusinesses; and getting to 100 percent renewable energy by 2030 and complete decarbonization by 2050. In doing so, he focuses heavily on environmental justice and equity. …

…To pay for it, Sanders says he would eliminate fossil fuel subsidies, cut back military spending related to oil, increase penalties for power plant emissions, and “massively” raise taxes on fossil fuel income and wealth, among other steps….

Bottom Line: It is truly bold and the scope is simply breathtaking. Even if he is not the candidate, he will have successfully injected fresh new thinking into the conversation and it will influence and inspire others.

2020 is not about ticking a box to identify the political tribe you belong to, but instead presents a rather stark choice. Do we address the greatest threat our species has ever faced, or will we instead continue do nothing.

This is the actual choice.

Right now CO2 level are still rising, and so we will continue to reap the consequences of that. The “do nothing” option is not a credible way forward.