If you know me, then you will know that I’m a staunch supporter of the concept called “Freedom of Thought”, which basically distills down into “you can believe whatever you wish” – fairies, unicorns, jesus and other similar myths. However, there comes a point at which you truly do need to raise your voice of protest, that moment arises when bat-shit crazy fanatics attempt to inflict their weird irrational nonsense upon others. 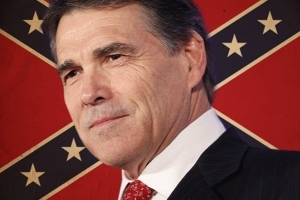 Sadly we have already passed that point with Rick Perry some time ago. The latest scary news is well-known, he announced this weekend that he would seek the Republican presidential nomination. Why the fear, well this now means that we have a presidential candidate who has in the past:

Both of the above are so extraordinarily reprehensible that it should immediately and permanently disqualify him from being taken seriously for national office … and yet here we are. It only leaves me wondering if the entire GOP “establishment” has gone insane.

Certainly Perry himself is indeed quite seriously delusional:

This is not just any candidate, he believes God is telling him to do this. Last month, when asked if he intended to mount a White House bid, Mr. Perry told a reporter for The Des Moines Register that he was “getting more and more comfortable every day that this is what I’ve been called to do. This is what America needs.”

So there you go then, lots of scary evangelical craziness and I’ve not even mentioned Michele Bachmann. Is this truly what the GOP establishment has degenerated into these days – a choice between an array of evangelical nitwits with fringe tendencies?