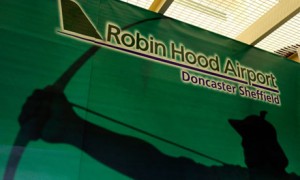 Paul Chambers, a 26 year old accountant, was arrested on 13th January by four police officers … Why? …Well apparently, his hideous crime was to post a joke on twitter. After making plans to travel through Robin Hood airport in Sheffield to see his girlfriend, he was alarmed to find that due to snow they were closing, so he tweeted the following to his friends…

“Crap! Robin Hood airport is closed. You’ve got a week and a bit to get your shit together otherwise I’m blowing the airport sky high!”

To his complete astonishment, the police turned up at his place of work, shoved him into a police car in front of colleagues, hauled him off to Doncaster police station, and interviewed him for the rest of the day. His iPhone, laptop and desktop hard drive were confiscated during a search of his house. It was all very terrifying and humiliating. Later he was charged, taken to trial, then found guilty and fined £1000, but having lost his job due to all this, he had no means of paying.

The bright side was an outpouring of support on Twitter, unexpected and overwhelming, with many users – including Stephen Fry and Jonathan Ross – offering to cover or donate towards his costs via a fund set up by a third party. Writers Sali Hughes, Emma Kennedy and Graham Linehan were among more than a thousand others who sent messages of support.

After the trial, he took it to appeal, but unfortunately common sense still did not prevail, he lost. Judge Jacqueline Davies called the tweet “menacing in its content and obviously so. “It could not be more clear,” she claimed, “any ordinary person reading this would see it in that way and be alarmed”. She also ordered Chambers to pay a further £2,000 legal bill for the latest proceedings. Now, what makes it all very odd is that, as the news articles put it, …

He was controversially prosecuted under a law aimed at nuisance calls – originally to protect “female telephonists at the Post Office” in the 1930s – rather than specific bomb hoax legislation, which requires stronger evidence of intent. Civil liberties lawyers criticised his conviction, as did the Twitter community, which reacted with a vengeance to his failed appeal.

So how exactly did the twitter community respond? … (trust me, you are going to love this) … prompted by one twitter user, @christt, thousands of others  started re-tweeting the exact words that got Paul into trouble, but added the hash tag #IAmSpartacus. It rapidly escalated and became one of the fastest trending phrases ever seen on twitter.

I love it … with the police and the judiciary demonstrating an insane degree of stupidity, this vast twitter response is oh so very appropriate


You can read more about all this here.