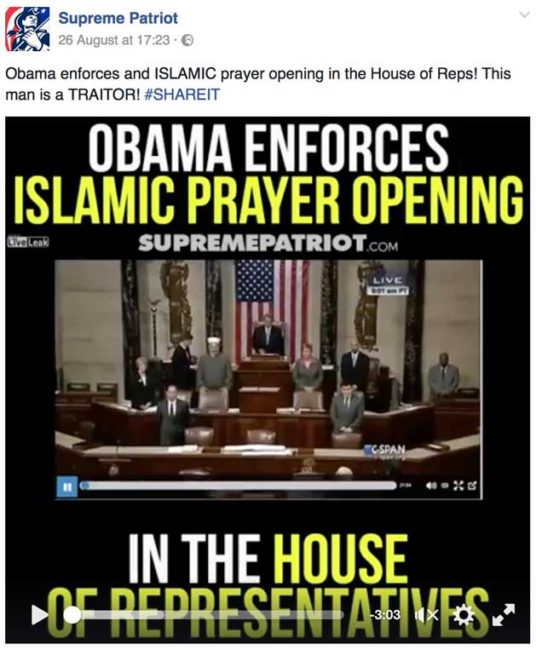 As part of the on-going and utterly bizarre claim that Obama is really a secret Muslim with an Islamic agenda, we have this latest gem doing the rounds (Image above and tweet below) …

What are the facts here?

The pictures (and also an associated video clip) show Imam Hamad Chebli of the Islamic Society of Central Jersey opening the session with a prayer. That really did happen, but it is not recent because that was back in Nov 2014 … two years ago.

So why are people suddenly offended by something that happened two years ago? Well hey, its election season, so clearly the latest incarnation of this is not spontaneous, it has been deliberately manufactured for political theatre.

Did Obama have anything at all to do with this?

So what it the deal here?

The US House of Representatives has a program in which house members can sponsor a leader of any faith of their choosing to open a session with a prayer. On the specific occasion presented above back in 2014 Rep. Rush Holt (D-NJ) nominated Imam Hamad Chebli. He introduced him as follows with the usual one-minute speech …

Mr. Speaker, I ask my colleagues to join me in welcoming Imam Hamad Ahmad Chebli, the Imam of the Islamic Society of Central Jersey in South Brunswick, New Jersey. Imam Chebli has been both a friend and an ambassador of Islam to me and many others in New Jersey, and we are all honored that his prayer has opened this session of Congress.

…He has worked hard to build interfaith dialogue and public understanding, serving as a member of the North and South Brunswick Diversity Committee and of the regional clergy association. Most recently, New Jersey’s Governor appointed Imam Chebli to the Governor’s Leadership Summit on Diversity.

He and I have a friendship and association that has lasted many years, especially since September 2001, and I greatly value our friendship.

.. and this is the prayer he offered, it is very neutral, generic, and is something that almost any cleric of any Christian domination would have presented …

O God, bless us as we begin a new day. Bless this assembly, bless the people and Nation it represents. O God, at this time in our history, the challenges for our Nation and the world are many. O God, grant these men and women the wisdom, the guidance, and the strength to pursue compassion, justice, and sound judgment. O God, in Your wisdom, You have placed upon them great responsibility and honor. O God, please help them with Your guidance and Your light. O God, grant them the will and the means to improve the well–being of all inhabitants of this great Nation and beyond.

An abomination of sacrilegious proportions was witnessed Friday when the National Cathedral allowed Muslims to hold an Islamic prayer service within its dwelling.

Islam has overstepped its boundaries in a Christian nation of 73 percenters, and it’s getting progressively worse. Openly infiltrating our houses of government with blasphemous declarations to a false god, the particular people bowing their heads in reverence will disturb and anger you.

With the re-election of Speaker of the House John Boehner and fellow Republicans gaining majority in Senate comes an outrageous display of submission to Islam.

Since we are in an election season, somebody has brushed the dust off this old canard from 2014 and then tossed it out as fodder for the baying Trump supporters to feed upon.

Personally I’m not religious and adhere to the principle of complete separation between church and state as stipulated within the constitution. Opening a session with a prayer to any Deity is really not appropriate, and so I would argue that these prayers breach that basic constitutional principle.

However, that aside, the claim that Obama is imposing Islam is pure grade-1 gold-plated BS.

2014 was not the first time an Imam opened a session of the US House of Representatives. Here is the complete list of all Imam’s who have been invited to do so (you can check the complete list here to verify this, just search for the word “Imam”) …

Note that three (highlighted in Blue) all took place when George W Bush was in office, and the very first was sponsored by a Republican. Remind me again how this is in any way about Islam being imposed.