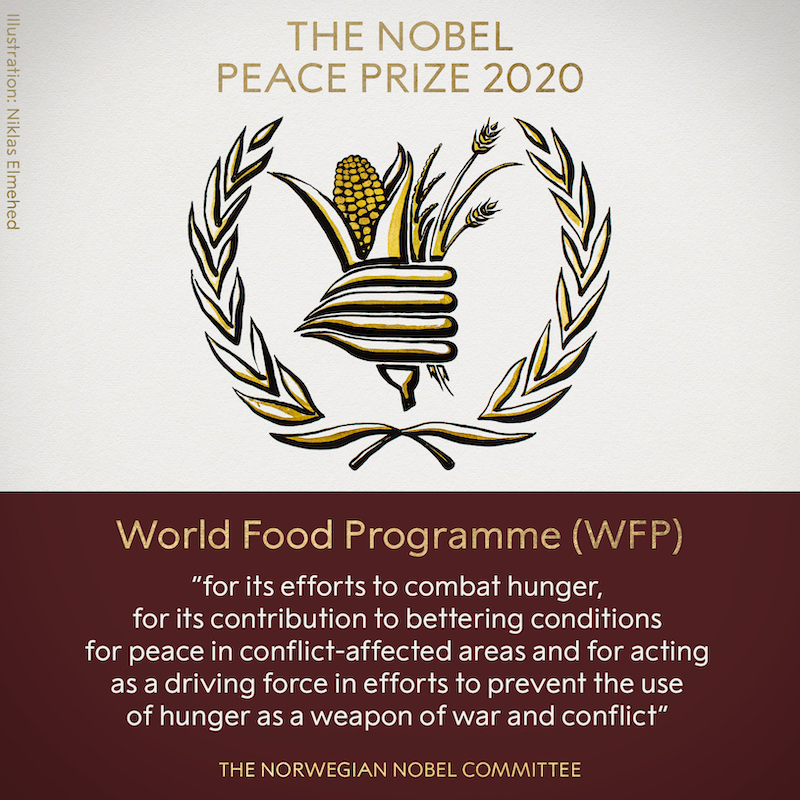 I generally applaud the 3 science awards and the literature award. The Economic prize, (which comes Monday), is not a Nobel, so I’ll be skipping that one. As for today’s Peace award … sigh! Over the years some of the “winners” have been truly bizarre choices. This is perhaps a reflection of it being very political.

This year they did get it right, but some of the past awards … well … no.

What does Peace even mean?

… and goes on to specify that the prize is to be awarded by a committee of five people chosen by the Norwegian Parliament.

Asking politicians to decide is perhaps the fundamental problem.

As stipulated by Nobel in his will, the three science Prizes are decided by the Swedish science academies, and so they involve a great deal of scientific rigour in their selection process. Members of science academies tend to know a bit about science and thus can make good choices. Because “Peace” is chosen by politicians it is deeply subjective and also highly politicised.

Why did Nobel create a Peace prize?

So what has been the problem?

To illustrate what I’m getting at, let’s look back and see some of the winners from previous years …

What perhaps makes the peace prize even weirder is that Mahatma Gandhi never won. He was nominated in 1937, 1938, 1939, 1947, but never received it. That specific non-award has been publicly regretted. Geir Lundestad, Secretary of Norwegian Nobel Committee, said in 2006 …

The primary problem here is that  (as argued by Norwegian historian Øivind Stenersen) the committee members utilise the granting of the award as a means of furthering Norwegian nation building and also promoting Norway’s foreign policy and economic interests. Since the committee is (as stipulated in Nobel’s will) composed of individuals chosen by the Norwegian Parliament, then this outcome is very predictable.

Having said all that, it is not all bad because sometimes they do get it right by spotlighting somebody truly inspirational. For example Nelson Mandela, or Martin Luther King Jr. (You can find a full list of past winners here). This year is an example of truly picking the right person.

But first, just before we go there, here is one last jaw-dropper.

Hitler and Mussolini were both nominated

Who gets nominated is kept secret for 50 years, and then all is revealed.

So beyond that 50 year blackout resides a rather surprising nomination or two.

Hitler and Mussolini were both nominated for the Nobel Peace Prize.

You might be tempted to think that this has just got to be parody. Alas no, it appears to be true. (I did also check the Nobel Nomination archives myself just to be sure and verified both)

I suspect the past committee choked on those nominations when they sat down to consider them.

Er … well yes, let’s quick brush over that and move on.

Now for this year’s reveal, it is a really good choice.

The need for international solidarity and multilateral cooperation is more conspicuous than ever. The Norwegian Nobel Committee has decided to award the Nobel Peace Prize for 2020 to the World Food Programme (WFP) for its efforts to combat hunger, for its contribution to bettering conditions for peace in conflict-affected areas and for acting as a driving force in efforts to prevent the use of hunger as a weapon of war and conflict.

The World Food Programme is the world’s largest humanitarian organisation addressing hunger and promoting food security. In 2019, the WFP provided assistance to close to 100 million people in 88 countries who are victims of acute food insecurity and hunger. In 2015, eradicating hunger was adopted as one of the UN’s Sustainable Development Goals. The WFP is the UN’s primary instrument for realising this goal. In recent years, the situation has taken a negative turn. In 2019, 135 million people suffered from acute hunger, the highest number in many years. Most of the increase was caused by war and armed conflict.

The coronavirus pandemic has contributed to a strong upsurge in the number of victims of hunger in the world. In countries such as Yemen, the Democratic Republic of Congo, Nigeria, South Sudan and Burkina Faso, the combination of violent conflict and the pandemic has led to a dramatic rise in the number of people living on the brink of starvation. In the face of the pandemic, the World Food Programme has demonstrated an impressive ability to intensify its efforts. As the organisation itself has stated, “Until the day we have a medical vaccine, food is the best vaccine against chaos.”

The world is in danger of experiencing a hunger crisis of inconceivable proportions if the World Food Programme and other food assistance organisations do not receive the financial support they have requested.

The Norwegian Nobel Committee wishes to emphasise that providing assistance to increase food security not only prevents hunger, but can also help to improve prospects for stability and peace. The World Food Programme has taken the lead in combining humanitarian work with peace efforts through pioneering projects in South America, Africa and Asia.

The World Food Programme was an active participant in the diplomatic process that culminated in May 2018 in the UN Security Council’s unanimous adoption of Resolution 2417, which for the first time explicitly addressed the link between conflict and hunger. The Security Council also underscored UN Member States’ obligation to help ensure that food assistance reaches those in need, and condemned the use of starvation as a method of warfare.

With this year’s award, the Norwegian Nobel Committee wishes to turn the eyes of the world towards the millions of people who suffer from or face the threat of hunger. The World Food Programme plays a key role in multilateral cooperation on making food security an instrument of peace, and has made a strong contribution towards mobilising UN Member States to combat the use of hunger as a weapon of war and conflict. The organisation contributes daily to advancing the fraternity of nations referred to in Alfred Nobel’s will. As the UN’s largest specialised agency, the World Food Programme is a modern version of the peace congresses that the Nobel Peace Prize is intended to promote.

The work of the World Food Programme to the benefit of humankind is an endeavour that all the nations of the world should be able to endorse and support.