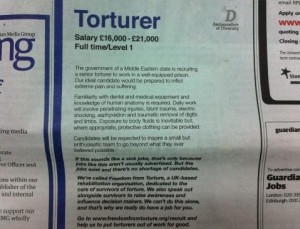 This one truly takes the biscuit … sitting smack bang in the middle of the careers advertisements within Today’s UK Guardian is an advert for a “Torturer”, starting on £16,000 to £21,000 a year. (This is the point at which you insert your completely gob smacked stunned silence) … the ad in question reads …

The government of a Middle Eastern state is recruiting a senior torturer to work in a well-equipped prison. Our ideal candidate would be prepared to inflict extreme pain and suffering.

Familiarity with dental and medical equipment and knowledge of human anatomy is required. Daily work will involve penetrating injuries, blunt trauma, electric shocking, asphyxiation and traumatic removal of digits and limbs. Exposure to body fluids is inevitable but, where appropriate, protective clothing can be provided.

Candidates will be expected to inspire a small but enthusiastic team to go beyond what they ever believed possible.

Now, just before you dash off a note to the Guardian laced with a collection of rather well-known anglo-saxon phrases, I first better let you in on what this is really all about –  it’s not a real advertisement.

This actually comes from Freedom from Torture, a charity, and so what they are really looking for are donors and campaigners. These are in fact the good guys, because their goal is to aid torture victims with medical, psychological and practical help.

OK, the real scumbags don’t actually advertise like this, but you know that regimes such as Syria, Iran, Saudi Arabia and Bahrain do this sort of stuff, as do  Hezbollah, or the various militia factions in Iraq, or Hamas in the Gaza Strip. In fact, looking at some of the post-Arab Spring regimes in Egypt and Libya, they also appear to be of serious concern as well.

It is a clever ad that raises the profile of a very serious issue regarding some very basic human rights.

What also might be worth pointing out is that we happily trade with Syria, Saudi and Bahrain, and Egypt and Libya, although perhaps not with Iran. And also with states known to harbour the NGO nutcases like Hezbollah, so when it comes to trade many appear to be happy to pretend stuff like this does not happen for the sake of a few $$$