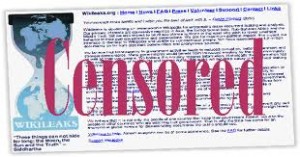 Regardless of how you feel, not only is all this a complete wet dream for all the newspapers, but also something fundamental has been changed within the political landscape, stuffing the genie back into the bottle is simply not an option … so where are we today?


MasterCard stopped payments to Wikileaks, and quickly came under attack from WikiLeak supporters … and I don’t mean that a few folks said some harsh words… I mean actual physical attacks …

The website of MasterCard would not load just before 10am on Wednesday; an error page cited a “DNS fail”. (Here’s some technical background)

Anonymous, the group of “hacktivists” vaguely linked to the influential internet messageboard 4Chan, has been targeting companies that have severed ties with Assange or WikiLeaks with so-called “distributed denial of service attacks” (DDoS). Such attacks are illegal and have become something of a subplot in WikiLeaks ongoing release of US embassy cables.

Operation Payback, a hacking group has also claimed credit for
taking down the website of a Swiss Bank that cut off funds to Julian Assange

PayPal has also now said that it was leant on by US government to cut off the funds to WikiLeaks. I suspect the hackers will be after them now as well as part of the counter offensive. During a press conference where they announced this, it was met with boos from the mostly European audience.

Julian Assange has gone to Jail
Yep, the UK authorities have locked him up and and denied him bail … most lightly outcome is that he will end up being deported to Sweden and then in turn handed over to US authorities for trial. One paper reports …”Informal discussions have already taken place between US and Swedish officials over the possibility of the WikiLeaks founder Julian Assange being delivered into American custody,”

What the authorities fail to appreciate is that he is not Wikileaks … if he simply vanished off the face of the planet right now, Wikileaks would not vanish with him … Observer columnist John Naughton on his blog Memex 1.1. comments …

The obsession with Julian Assange would be comical if it weren’t so misleading. One can see why news editors go for it, of course. First of all there’s a handsome, enigmatic, brooding, Svengali-like hero/villain allegedly pitting himself against the world’s only superpower. Add in allegations of sexual crimes, a handful of celebrity supporters and a Court-side scrum and you’ve got a tabloid dream story.

Assange is undoubtedly an interesting figure, but to personalise the crisis in these terms is a failure of journalism…

WikiLeaks is bigger than Assange, and it would survive his disappearance, whether by imprisonment or worse – just as Al Qaeda would survive the death of Osama bin Laden

Latest revelations today …
So what is new today? … well apparently …

Now that last one truly blew me away … spend millions on propaganda to no effect, but give them a few episodes of “Desperate Housewives” and you win their hearts … WTF!!!

What Others have been saying
Emily Bell, The Guardian’s former director of digital content, argues …

“This is the first real battleground between the political establishment and the open web,”

The internet guru Clay Shirky said something similar on Newsnight last night. In an interesting discussion right at the end of the programme, he pointed to the American double standards being exposed by the WikiLeaks crisis.

“If WikiLeaks is attacked outside of due process and just run off the internet because the government has decided we don’t like it, that would be a catastrophic loss for free speech,”

1 thought on “The latest on the Wikileaks war”