Sitting at the end of Dublin’s southbound Luas line, running north off St Stephens Green towards Trinity, you will find that mecca for all Irish shoppers … Grafton Street. If you have ever played the Irish version of Monopoly, the one with Dublin streets, then you should recognize the name, for this is the street to own, and here is where a real-world game of Monopoly has also been going on. As a reflection of our current economic reality, both shoppers and also shop keepers will be often crying out two words these days … “How Much?”.

Bewleys, the famous coffee house located about midway down the street, serves over 1,000,000 visitors per year, or at least that is what they claim, that’s roughly about 3000 per day, its credible (the place is large) and perhaps that number includes all those who pop in, check the menu and yes … cry out “How Much!” then rapidly scarper. If curious, lunch for say about four will cost you at least 60 Euros, and that would be just a sandwich and a coffee each. Actually the coffee really is very good, I say that as somebody who goes into withdrawal if I don’t get my daily dose, so having sampled a lot, it does rank in my list of top ten.

Even today there is a lot of profit being reaped, in fact if you wander up and down the street sampling the buskers and shoppers, you could be quite oblivious to the current economic reality, yet even here a harsh cold wind blows. Now let me ask you a question, Bewleys do not own their building (and yes, several centuries is a hell of a long time to be paying rent), so how much rent do you think they are paying each year to their current landlord, a pension fund?  The answer blew me away … it is 1.5 Million (insert stunned silence here), or to be more precise that’s 8,611 Euros per year per sq m. What can I say except “Yikes”. 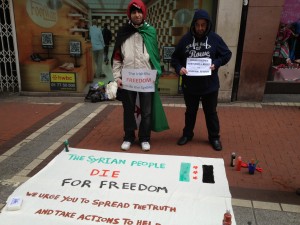 As a stark contrast to all this economic reality, I came across the guys pictured left on Grafton Street yesterday. I’ll not provide names least the wrong people read this, for autocratic regimes can sometimes attempt to hunt down critics. Here is what really mattered, for this is a very public secular cry for freedom, a demand to be remembered. Tempting as it might be to apply the word “rebel” to a corporation or Joe public complaining about financial issues, these are true rebels, for their streets are paved with the blood of many. Those who die are not only rebels demanding freedom, here is the story of what happened to seven year old Julnar … 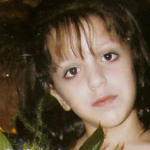 As Syrian troops unleashed the first wave of the week – long barrage against Homs last week, mosques across restive districts of Damascus called citizens to prayers of protest. At 2.30 in the morning, calls of “God is Great” washed across the districts from the minarets and residents took to the streets in angry protest.

“Julnar heard the mosque’s call, so she started to wake me up. She wanted to join in,” said her mother. “I put a chair at her bedroom window for her to stand on and I started chanting ‘Allah Akhbar’ with my daughter.”

Suddenly the little girl fell to the ground. Blood was oozing from two bullet wounds in her stomach.

Panicked, her mother rushed her to a neighbour’s ground – floor apartment. Outside came the constant rattle of gunfire as government troops sought to silence the protest.

“I knelt quietly next to my dying daughter on the floor. I held her hand, I whispered with her verses that Muslims must say before they die,” said her mother. “Around me everyone was weeping and screaming. Somebody massaged her chest”.

She died just before dawn …Frightened of the incendiary reaction that might come from the child’s death, the funeral was a rushed and controlled affair.

Security forces prevented the attendance of men. Only her father and two brothers were allowed to go.

We might feel we are under a heavy economic yoke, yet the air we breath is ours, others endure a stench of oppression that we cannot even begin to imagine.

The current Syrian regime must go, and yet a I also worry about what would replace it. A theocratic dictatorship run by religious thugs is a distinct possibility, and simply replaces one form of oppression for another. The guys above in Grafton Street were not promoting Islam, but instead were taking a simple secular stance – cry for freedom. In Egypt the liberal and secular groups that drove the uprising have been sidelined, and now the religious threaten to dominate politics of decades to come. When the corrupt regime falls, Syria faces the same risk.