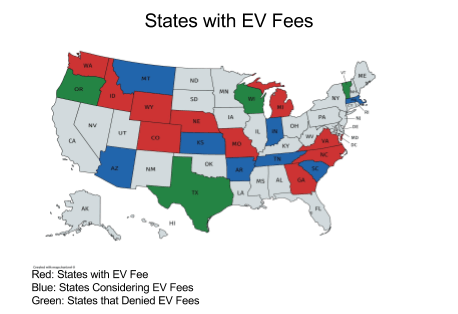 I personally love the idea of switching from gas guzzling to an electric vehicle, and plan to do exactly that. If not wholly EV, then a hybrid at least. The rise of the EV has however also seen a corresponding rise of legislation that punishes people financially for switching to electric vehicles.

What would the proposed financial fee be?

Others are also pondering the idea of doing something like this

What else is happening?

We have already seen this

Back in Feb 2016 there was a story about exactly this in other states, namely Wyoming, Colorado, Virginia, Nebraska, Missouri, Washington, North Carolina, Idaho, Georgia, and Michigan. They have already implemented yearly fees for simply driving an EV. One story explains it as follows …

Electric vehicles (EVs) are on the rise. In some locations, it’s no longer surprising to see LEAFs, Volts or any of the multitude of available plug-in models driving alongside us on the road. Not even the climate-change-denying, fossil-fuel-baron Koch brothers, who run Koch Industries, have been able to ignore the reality of EVs’ growing popularity. According to journalist Peter Stone, the Kochs have quietly launched a multimillion dollar plan aimed at slowing EVs down.

… and so we need too ask if this is a continuation of the same.

This attack is coming at a time when EVs are just starting to take off within the larger auto industry—and it’s likely no coincidence this attack is coming now. Reportedly, for more than a year, Koch Industries has spent nearly $10 million dollars, and plans to do so every year, on a campaign to boost petroleum-based transportation fuels and attack government support for electric vehicles. This campaign was presumably created because of the risk EVs place on the oil and coal industry. American Legislative Exchange Council (ALEC), a right-wing state legislation machine funded by the Koch brothers and several other multinational corporations, introduced in December of 2015 a resolution to discourage states from providing subsidies for EVs at their States and Nation Policy Summit.

Is this really a Koch inspired conspiracy?

I’m not convinced that is what drives all of this.

They do of course have a financial interest in maintaining oil dependence, and they do of course strive to protect their business interests and are spending real money to ensure that happens.

Beyond all that there is also the reality of the financial pressures felt by individual states to find yet more pockets to pick in order to balance their budgets, and it is that pressure that is perhaps really driving this.

EV owners do of course pay utility bills and thus pay the associated taxes, but they are no longer consuming gas and so are no longer paying the state taxes associated with the purchase of such fuels. This leaves a gap in state revenue income. The maintenance of roads still needs to be funded, and so the emergence of taxes, or to avoid that dreaded T word, ‘fees’, like this are perhaps inevitable.

As more and more switch from gas guzzlers to an EV, state revenues will suffer. Side note, it is not just EVs, the more conventional cars are also becoming more fuel efficient, and that also explains the decline.

To help fill that financial gap states will look across their borders to see what streams of revenue other states tap into for income, and so much of this latest flurry is basically a “me too” response.

To justify their proposal and start charging tax for each mile driven, the folks on Oregon spell it out like this …

Some are still highly motivated to encourage a switch to EVs.  For example New York has taken the opposite stance and wants to waive first-year registration fees for EVs and other clean-burning cars. Large cities simply do not want to remain choked in fumes and so the desire and need for clean air overrides such pressures at the moment.

The switch to EV’s is inevitable

Oil dependence is not sustainable, nor is it desirable for environmental reasons. The rather obvious benefit will be cleaner air in cities, and also lower total cost of ownership for users. However, far more importantly, we desperately need to rapidly reduce our carbon emissions if Climate Change is to be addressed in a meaningful way.

Yes, there will indeed be a revenue gap, and so great care needs to be taken to get it right. A flat fee for just having an EV is perhaps the wrong approach because it might discourage and slow the switch to EVs. A far better scheme is the Oregon one known as OReGo. This is the one that you can see the numbers above for. It is an optional at the moment, and still an early experiment. It is basically a road traveled tax that also saves conventional gas vehicles money and yet it still encourages consumers to go electric, and so that is perhaps the way to go with this.

The EVs are coming and that forces a change in how states collect revenue to fund road maintenance.