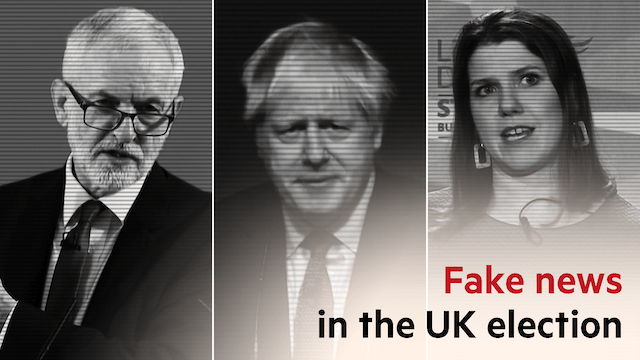 Thursday 12th Dec is Election day in the UK. Is it a nice clean election with no evidence of any manipulation at all?

Here are a few quick examples.

The Punch that was not a Punch

The BBC Sockpuppets are being played as usual. For example we had the “credible” report yesterday that a Conservative minister was physically attacked. BBC and ITV reported punches being thrown and that it was all organised. Without any verification some still stuck to this …

Then later she apologised . Her insider sources had yet again lied …

They’re not “sources”. They are senior politicians/aides spreading misinformation. That is now the story. Who are they? She has the facts. It is literally her job to report them.

She is of course not the sole promoter of all of this. Others such as Peston are so far up Johnsons Arse that they can almost see Laura’s feet.

What is familiar (to those in the UK) is the news of the tragic and very seriously ill 4 year old being treated on the floor of a hospital on coats because no resources are available. In that context you may wish to check out this thread. The news is real, the claim is real, but there is now a disinformation campaign attempting to claim that it is all fake …

It is like this because the Tory’s have starved the NHS of cash. This is well established and so news of Boris promising lots of resources, you when in a position to actually make a meaningful change, did nothing …

It all results in stuff like this utter insanity happening …

Should we be surprised?

Johnson opted to bury the report on Russian Interference in UK elections and not publish it, then starts spouting the claim that there is no evidence of any interference on the basis on no evidence at all. You can more or less guarantee that if he says something then it is probably not true. The man has a very long well-established track record for lying. Given this track record, he simply should not be trusted, and anything he says should by default be assumed to be a pack of lies.

There are very clear well-documented steps that should be taken to clean things up. Back in February the UK Parliament’s cross-party Digital, Culture, Media and Sport Committee published its final report on Disinformation and ‘fake news’.

That report specifically called for the following four things:

… or to put all that another way …

To quote that report …

“Democracy is at risk from the malicious and relentless targeting of citizens with disinformation and personalised ‘dark adverts’ from unidentifiable sources, delivered through the major social media platforms we use everyday. Much of this is directed from agencies working in foreign countries, including Russia.

What happened to this report and all these very sensible recommendations?

Absolutely nothing, it was simply ignored, and so what we have now is a very unsafe election.