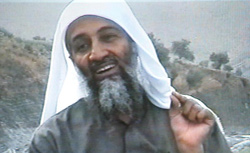 First is Christopher Hitchens who is truly a modern intellect, and writes in Slate …

he decided to gamble all these ripening strategic advantages in a single day. Then, not only did he run away from Afghanistan, leaving his deluded followers to be killed in very large numbers, but he chose to remain a furtive and shady figure, on whom the odds of a successful covert “hit,” or bought-and-paid-for betrayal, were bound to lengthen every day.

It seems thinkable that he truly believed his own mad propaganda, often adumbrated on tapes and videos, especially after the American scuttle from Somalia. The West, he maintained, was rotten with corruption and run by cabals of Jews and homosexuals. It had no will to resist. It had become feminized and cowardly. One devastating psychological blow and the rest of the edifice would gradually follow the Twin Towers in a shower of dust. Well, he and his fellow psychopaths did succeed in killing thousands in North America and Western Europe, but in the past few years, their main military triumphs have been against such targets as Afghan schoolgirls, Shiite Muslim civilians, and defenseless synagogues in Tunisia and Turkey. Has there ever been a more contemptible leader from behind, or a commander who authorized more blanket death sentences on bystanders?

Theocratic irrationality is not so uncommon that defeats like this are enough to render it unattractive. No doubt some braggarts will continue to tell instant opinion polls in the region that they regard him as a holy sheik or some such drivel. (Funny how those polls never picked up the local appetite for constitutional democracy.) With any luck, there will even be demented rumors that Bin Laden is not “really” dead. Fine: He’d probably already done the worst damage he was going to do. In anything describable as the real world, his tactics were creating antibodies and antagonists, or no longer matched observable conditions, or had at least hit diminishing returns. From Baghdad to Bali, it has been conclusively demonstrated that Bin-Ladenism is the cause of poverty, misery, and unemployment and not—as some know-nothings used to claim—a response to it.

The martyr of Abbottabad is no more, and the competing Führer-complexes of his surviving underlings will perhaps now enjoy an exciting free rein. Yet the uniformed and anonymous patrons of that sheltered Abbottabad compound are still very much with us, and Obama’s speech will be entirely worthless if he expects us to go on arming and financing the very people who made this trackdown into such a needlessly long, arduous and costly one.

You can read the full article here.

Now, on to the second writer whose words have caught my attention. Stick with me here, its not more of the same, but instead asks some very obvious questions that demand an answer. This time its Salman Rushdie who writes in “The Daily Beast” …

Osama bin Laden died on Walpurgisnacht, the night of black sabbaths and bonfires. Not an inappropriate night for the Chief Witch to fall off his broomstick and perish in a fierce firefight.
…
We had heard—I certainly had, from more than one Pakistani journalist—that Mullah Omar was (is) being protected in a safe house run by the powerful and feared Pakistani Inter-Services Intelligence agency (ISI) somewhere in the vicinity of the city of Quetta in Baluchistan, and it seemed likely that bin Laden, too, would acquire a home of his own.
…
This time the facts speak too loudly to be hushed up. Osama bin Laden, the world’s most wanted man, was found living at the end of a dirt road 800 yards from the Abbottabad military academy, Pakistan’s equivalent of West Point or Sandhurst, in a military cantonment where soldiers are on every street corner, just about 80 miles from the Pakistani capital Islamabad. This extremely large house had neither a telephone nor an Internet connection. And in spite of this we are supposed to believe that Pakistan didn’t know he was there, and that the Pakistani intelligence, and/or military, and/or civilian authorities did nothing to facilitate his presence in Abbottabad, while he ran al Qaeda, with couriers coming and going, for five years?
…
For a long time now America has been tolerating the Pakistani double game in the knowledge that it needs Pakistani support in its Afghan enterprise, and in the hope that Pakistan’s leaders will understand that they are miscalculating badly, that the jihadists want their jobs. Pakistan, with its nuclear weapons, is a far greater prize than poor Afghanistan, and the generals and spymasters who are playing al Qaeda’s game today may, if the worst were to happen, become the extremists’ victims tomorrow.
…
There is not very much evidence that the Pakistani power elite is likely to come to its senses any time soon.

You can read all of the second article here.

Sadly, Bin Laden had no monopoly on theocratic irrationality, so while the passing of this contemptible psychopath marks a moment when we can all breath a little bit easier, its not the end-game. The double-dealing of failed states, such as Pakistan’s pandering to such fanatics, will ensure that other equally delusional psychopaths continue to receive succor and enough room to thrive and flourish.

Anybody out there still care to suggest that religion is a good idea?