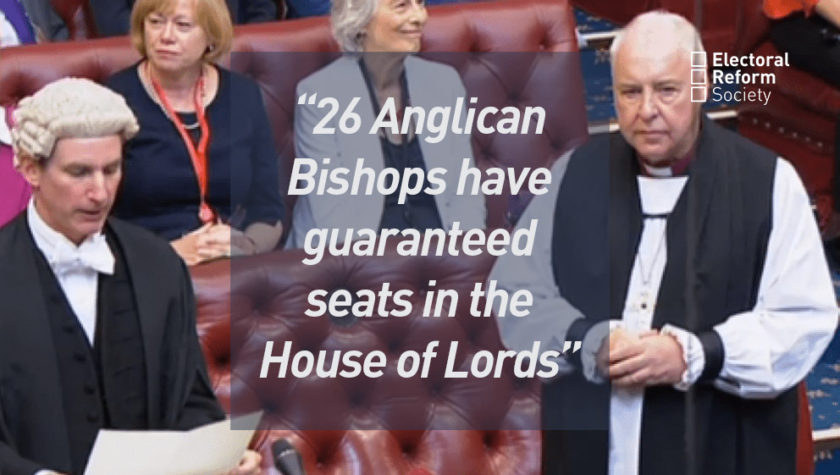 When we consider the idea of religious clerics being in charge then we tend to think of regimes such as Iran or Saudi Arabia. Perhaps we even mock them for actually have religious clerics running things. We might quip that this is truly medieval.

Before we proceed to criticise them, perhaps we should put our own house in order.

In the UK the Queen, is both the official head of state and also the head of the Church of England. 26 bishops also take a seat in the House of Lords. The sole, or should that be soul, criteria for them being there is that they sincerely believe that their imaginary friend is real.

The UK literally has unelected religious clerics in the mix.

What do people make of all this?

YouGov did a mini poll this week

They asked the question “Do you think the House of Lords should or should not continue to have places for Church of England bishops?”

The answer is that a majority of those polled said “No”.

Dig a bit deeper and you discover that right across all political views, it is still “No”.

Clearly there is an appetite to remove them.

The issue with the House of Lords goes deeper than just Bishops. It is packed with hereditary peers (i.e. Lords chosen from among those who have inherited their peerages). The entire edifice is highly problematic.

This second chamber is composed of Lords Spiritual, the bishops, and also Lords Temporal. That second group is officially appointed by the Queen from a list supplied by the Prime Minister. Once appointed you are there for life, nobody ever votes for you, nor can the public vote you out.

The entire edifice is unrepresentative, undemocratic, corrupt, and quite frankly unfit for purpose.

That last observation of corruption might be dismissed. Once again, hit pause and consider the facts.

A 2015 study found that of 303 people nominated for peerages in the period 2005–14, a total of 211 were former senior figures within politics (including former MPs), or were non-political appointments. Of the remaining 92 political appointments from outside public life, 27 had made significant donations to political parties. The authors concluded firstly that nominees from outside public life were much more likely to have made large gifts than peers nominated after prior political or public service. They also found that significant donors to parties were far more likely to be nominated for peerages than other party members.

University of Oxford: Is there a market for peerages? Can donations buy you a British peerage? A study in the link between party political funding and peerage nominations, 2005-14

Rather obviously reform really is needed.

Could we ever really trust an utterly corrupt Tory government to not simply replace it with something even worse?

Side Note: Yes the Tory Government is utterly corrupt. We are sinking rapidly into a downwards spiral – cronyism; the bypassing of rules designed to prevent corruption; the erection of guard rails against transparency, openness and accountability; the use of “move on, nothing to see here” whenever difficult questions arise. That however is perhaps a rant for a different posting.

If the topic of electoral reform in the UK is of interest, then the UK’s Electoral Reform Society is perhaps your next port of call.

Clerics in the house of Lords – Tweets