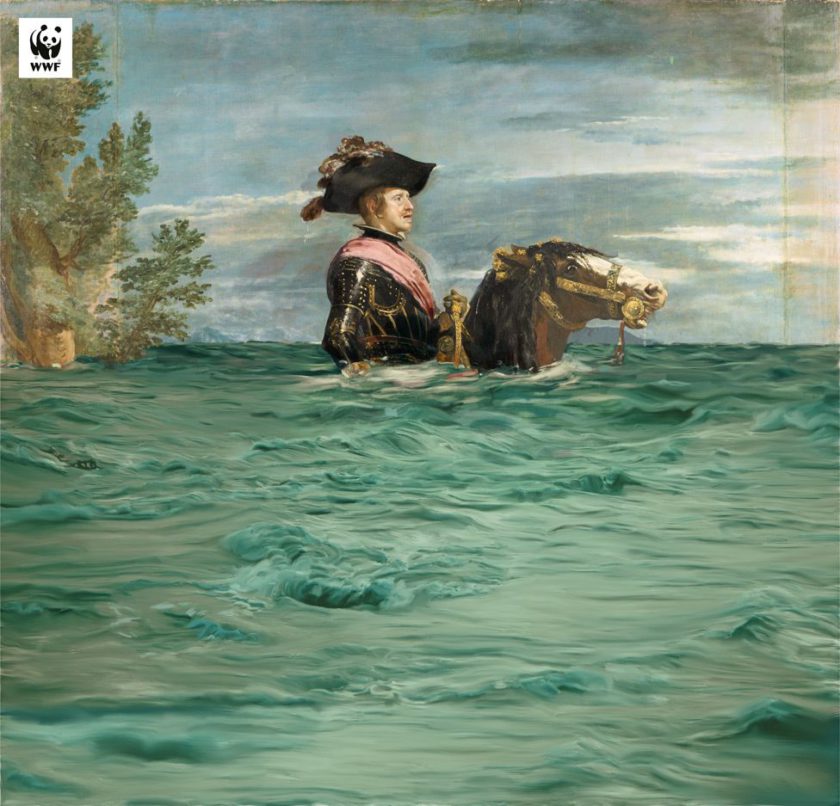 Now this is an interesting twist. The World Wildlife Fund, and the Prado Museum have collaborated to modify 4 famous works of art to illustrate the impact of Climate change.

The BBC reports the details.

Before we jump in, you might seriously wonder if this is a prank and that perhaps the BBC and others have been successfully fooled. Nope, here is the official Press release on the Prado website in Spanish (Google Translate is your friend) …

four masterpieces have been selected such as Felipe IV on horseback from Velázquez, Children on the beach of Joaquín Sorolla , El quitasol de Goya and El Paso from the Patinir Lagoon Stygia to alert about the rise in sea level, the species extinction, the drama of climate refugees or the disappearance of rivers and crops due to extreme drought.

With the launch of the awareness campaign + 1.5 ° C Lo Cambia Todo, the Prado Museum and WWF use art as a universal language to explain in a shocking and novel way the damage to the Earth of the temperature increase.

This awareness campaign is an original commitment to shake consciences and mobilize society in the face of climate change.

1 of 4 – Felipe IV a Caballo (Philip IV on Horseback) by Diego Velázquez.

Used to highlight the issue of rising sea levels

2 of 4 – El quitasol (The Parasol) by Francisco de Goya

Doctored to reflect the social drama of climate refugees

Modified to depict the extinction of species

WWF Secretary General in Spain, Juan Carlos del Olmo, commented that the celebration of COP25 is …

“the opportunity to send a message of action to the whole world through the universal language that is art. And for that, it cannot have a better ally than the Prado Museum, a recognized institution and a global sounding board that is also celebrating its 200th anniversary. ”

Javier Solana, president of the Royal Board of the Prado Museum…

“for the Museum , this project represents an opportunity to continue putting art and its values ​​at the service of society. “

Beyond the above there is more art at COP25.

The installation, first unveiled by Quinn at the Venice Biennale in 2017 and commissioned by Halcyon Art International, shows two gigantic hands of a child emerging from the Grand Canal in Venice to protect and support the historical building of the Ca’ Sagredo Hotel.

The 3-meter version of the sculpture is being brought to COP25 in Madrid as part of a partnership between UN Climate Climate Change, Lorenzo Quinn and Halcyon Art International.

“Venice, the floating city of art and culture that has inspired humanity for centuries, is threatened by climate change and time decay and is in need of the support of our generation and future ones”, said Quinn. “Let’s join ‘hands’ and make a lasting change”

Given the record floods that hit Venice earlier this month, reaching the highest levels in more than 50 years and leaving the world heritage site sunk in almost two meters of water, Quinn’s alert sounds more urgent than ever. If the city is unable to adequately protect itself from worsening flooding, it could lose its status as a World Heritage Site, warned UNESCO’s World Heritage Centre.