I appear to be falling into a habit of writing a not so serious posting for the weekend and so in keeping with that tradition, let’s start by taking a small ramble over the history of the very first live webcam.

The world’s very first live WebCam emerged from the depths of the computer science department at Cambridge University back in 1991. It was however something that was not a research driven initiative, but instead came about due to something far more practical and was knocked up in a day to meet a rather important need.

Quentin Stafford-Fraser has written up the official biography of it all, and so in his own words …

I was working on ATM networks in a part of the Computer Lab known as the Trojan Room, (a name which, perhaps, causes some amusement to American readers). There were about fifteen of us involved in related research and, being poor, impoverished academics, we only had one coffee filter machine between us, which lived in the corridor just outside the Trojan Room. However, being highly dedicated and hard-working academics, we got through a lot of coffee, and when a fresh pot was brewed, it often didn’t last long.

Some members of the ‘coffee club’ lived in other parts of the building and had to navigate several flights of stairs to get to the coffee pot; a trip which often proved fruitless if the all-night hackers of the Trojan Room had got there first. This disruption to the progress of Computer Science research obviously caused us some distress, and so XCoffee was born.

In the Trojan Room there were several racks of simple computers used in the testing of our networks. One of these had a video frame-grabber attached and was not being used at the time. We fixed a camera to a retort stand, pointed it at the coffee machine in the corridor, and ran the wires under the floor to the frame-grabber in the Trojan Room. Paul Jardetzky (now working in California) then wrote a ‘server’ program, which ran on that machine and captured images of the pot every few seconds at various resolutions, and I wrote a ‘client’ program which everybody could run, which connected to the server and displayed an icon-sized image of the pot in the corner of the screen. The image was only updated about three times a minute, but that was fine because the pot filled rather slowly, and it was only greyscale, which was also fine, because so was the coffee.

This system only took us a day or so to construct but was rather more useful than anything else I wrote while working on networks.

OK, so that was just an in-house app, what about the Web part?

the elderly frame grabber eventually gave up the ghost, Paul and I moved on to other things, and the Trojan Room coffee pot would have sunk into obscurity had not Daniel Gordon and Martyn Johnson resurrected the system, treated it to a new frame grabber, and made the images available on the World Wide Web. Since then, hundreds of thousands of people have looked at the coffee pot, making it undoubtedly the most famous in the world.

… and thus was born the world’s very first Webcam. Initiated, not via research or a desire to change the world, but simply because a couple of guys wanted to save themselves the bother of a trip to the coffee machine if it was empty.

It’s gone now, it was switched off in 2001 when the department was moved to a new location. At the time of that switch off it did actually merit a mention on the front page of both The Times and also The Washington Post. The story does not end there.The Krups coffee pot was auctioned off, bought by the German magazine Spiegel Online, and then put back online.  It was then loaned in 2015 to the German Museum of Technology in Berlin and has been on display there ever since.

If curious, then here is the original web page, that is still up on the Cambridge university website. The xcoffee image however is no longer live.

Unrelated to the above in any way, except that it involves a communal coffee pot and also a camera is the rather famous urban legend of the coffee potty. Yes, this narrative is going exactly where you think it is going, and so if you have a sensitive disposition then you might wish to consider not reading any more of this.

One employee noted that the coffee had evolved a rather unique flavour and being a bit of a suspicious soul, setup a hidden camera in the communal kitchen. Later, when checking the results, was horrified to discover that one employee had actually been pissing in the communal coffee pot on a regular basis. When challenged, it turned out that he had been made the butt of way too many jokes by his colleagues and had started doing this to get revenge. Needless to say, it turned out to be a career decision on his part.

OK, so it is just an Urban Legend and is not actually true, nobody would really do something like this … right?

Yes, I remember what I said about friend-of-a-friend stories, but apparently there is some truth to this tale, it did actually happen.

A quick search reveals an example from back in 1994, and it made the press at the time …

The one thing we learn from history is that often history repeats itself. It all played out once again in 2005. Here is a report of that second incident from NBC …

A former postal worker who poured urine into his co-workers’ coffee must serve six months in a jail work-release program.

Thomas Shaheen, 50, of suburban Springfield Township, also must pay $1,200 to the people he used to work with to cover their cost of making a secret video of his role in tainting the office coffee.

Shaheen stood and apologized to several postal workers in Akron Municipal Court where he pleaded guilty on Monday to two misdemeanor charges of tainting food.

“I don’t know what became of me,” said Shaheen, a postal employee for 13 years fired from his job at a post office vehicle maintenance facility in Akron. “I hope you find it in your hearts someday to forgive me.”

The tainting occurred over several months. When workers realized what was going on, they told supervisors and an investigation began. When nothing came of the probe, workers had a video camera installed in the room where staffers made coffee.

Shaheen was videotaped on two occasions in July 2005 pouring urine into a coffee pot in a break room.

He didn’t offer a motive, but his lawyer, Paul Adamson, said Shaheen had been frustrated about his work.

A Culpeper jury ordered an ex-town employee in Culpeper County Circuit Court on Monday to pay $5,001 to his former co-worker whose coffee pot he admitted to spiking with his own urine.

James Carroll Butler, who turns 54 next Sunday, owned up to urinating in Michael Utz’s coffee pot in March 2009 because of “personal ill will and spite toward him.” Before the incident, Butler had worked for the town’s waste water plant for 17 years until his departure in 2009.

According to the jury’s verdict form in this civil matter, it found that Butler “committed battery upon Michael Utz or put him in reasonable fear of receiving bodily harm.”

Sometimes it is not malicious and is instead practical

The idea of pissing in the coffee pot and then knowingly drinking it might sound utterly bizarre, but apparently there is one small very select group that more or less do exactly that, perhaps without thinking too hard about it all. Up on the International Space Station (ISS) the astronauts have a very special ISSpresso machine that will utilise recycled urine to churn out coffee. In fact, here it is … 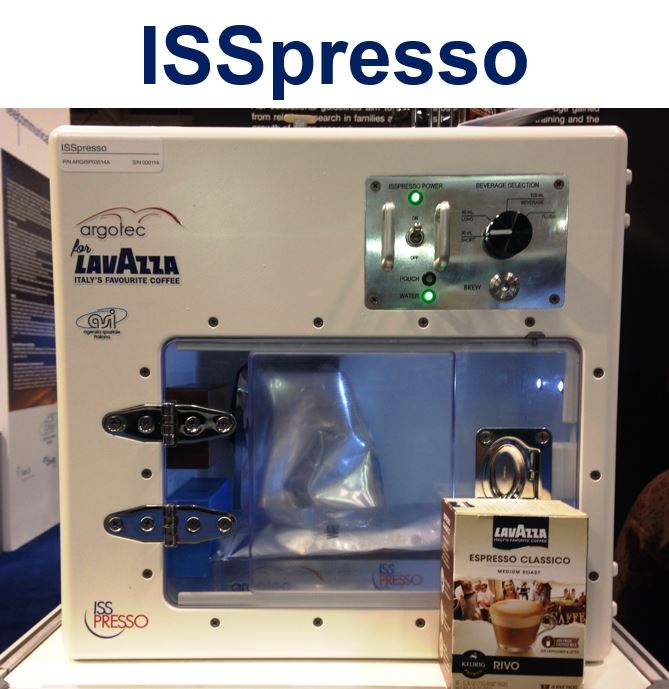 The official NASA page on it very wisely skips over the source of the liquid it uses, but least you wonder, there can be no doubts here, 93% of the water on the station is recycled, so yes, their coffee does indeed have a …(cough cough, ahem) …  human source.

Apparently the Russians refuse to drink it.

OK, so that is enough for today, I think I’ll take a break now. Hey, can I make you a coffee?