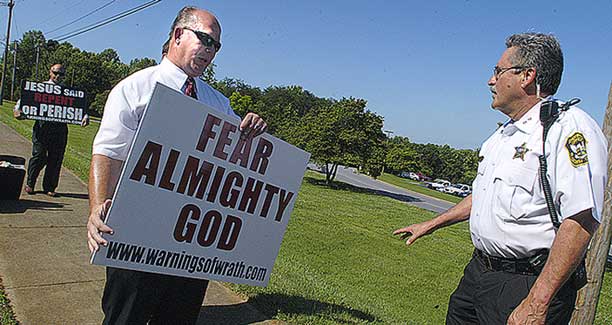 The Open Door Baptist Church in South Carolina has had a bit of a reputation for being very vocally Anti-Gay. They tend to turn up and picket with signs that promise hellfire and brimstone to anybody who is gay, and as an example, here is one article describing how they behave …

Open Door Baptist Church in Easley, S.C., launched their website a few years back with the flame-spitting splash page, “The sodomites have come out of the closet and the churches and preachers have went in them.” Pastor Randy Bryson led his men (they were all male) to the curb outside Duke University’s East Campus and waited for crowds to gather.

The men brought a megaphone and their Bibles and preached about the sin of homosexuality despite pouring rain, declining temperatures and an audience of parade-goers comprised largely of university students who were either antipathetic toward them or ready to debate them on intellectual grounds.

The protest signs included phrases like, “God’s love will not save you from hell”and, “Gay pride is why Sodom was fried.” There were also rehashings of the bogus correlation between homosexuality and pedophilia and homosexuality and neglectful/abusive fathers. It was homophobia’s greatest hits collection.

These guys were of course, as always, not out to convince anybody of anything. Instead they provoke and at best stir up blood-pressure, and so all this ever delivers at best is a shouting match. They might indeed truly believe they are taking a stand for the word of a god, but all they are actually doing is to in effect self-certify as bigoted nutters who are openly opposed to basic human rights.

So how should you engage, or even how could you possibly do so in any meaningful sense?

You might of course be tempted to check it out, so be warned, it is very much NSFW.

The guy who set it all up explains …

Times have changed for the better

The bigots are now very much the minority because the polls demonstrate that the majority of the US population supports gay marriage, and in fact we reached that point almost many years ago, and so we don’t need to engage in bitter arguments, but instead can simply ignore them. Time will naturally take care of it all, because the statistics clearly demonstrate that it is the younger generation that is far more tolerant …

The best response to them is laughter, satire, mockery and humour, and for me this URL change ticks that box. The serious debate has been done and dusted; they don’t have any credible arguments for their stance except to perhaps point to texts in a book that also advocates support for slavery. Many who do believe quite rightly toss all the pro-slavery bits out, and also can (and generally do) now add the homophobic texts to that discard list as well, for this is not about belief vs non-belief, but rather is really all about a choice between being a decent tolerant human, or being an obnoxious twit.