NECSS is an annual skeptic conference that is run by the folks who bring us the well-known Skeptics Guide To the Universe podcast.

They have issued the following announcement …

The Northeast Conference on Science & Skepticism has withdrawn its invitation to Richard Dawkins to participate at NECSS 2016. We have taken this action in response to Dr. Dawkins’ approving re-tweet of a highly offensive video.

We believe strongly in freedom of speech and freedom to express unpopular, and even offensive, views. However, unnecessarily divisive, counterproductive, and even hateful speech runs contrary to our mission and the environment we wish to foster at NECSS. The sentiments expressed in the video do not represent the values of NECSS or its sponsoring organizations.

We will issue a full refund to any NECSS attendee who wishes to cancel their registration due to this announcement. 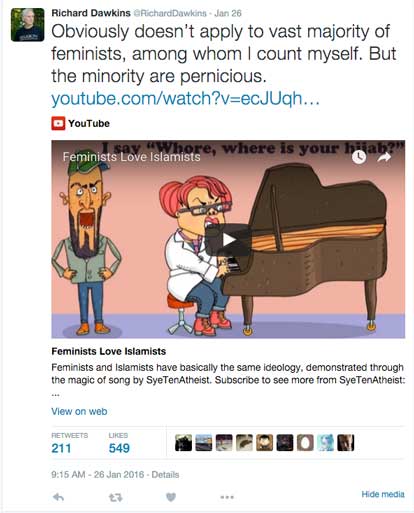 He tweeted out a link to a “Feminists Love Islamists” clip, and if you check it out then you will find something that appears to be rather lame and pretty much on par with the stuff that South Park churn out … in other words, it is standard satire.

Somebody later pointed out to him that this was not just satire designed to deploy generic criticism, but was specifically targeted at one individual and was designed to stir up hatred against that specific individual (whom I will not name, because it would not be appropriate to do so, but if you really want to go there, then google is your friend). I would add that some have suggested she earned the scorn heaped upon her due to her own obnoxious behaviour, but I do not agree.

Upon learning all this, he immediately deleted his tweet, and also issued the following tweets …

PLEASE PLEASE PLEASE don't EVER threaten anyone with violence. We should be free to use comedy/ridicule without fear it may inspire violence

Exactly. But it's worrying if legitimate mockery and ridicule triggers some nutter into issuing violent threats. https://t.co/Kfnh83M7JA

Having learned that the woman in the joke song is a real person who has been disgracefully threatened with violence, I'm deleting my tweets.

So basically he made an honest mistake, and when he learned that, he rapidly adjusted his position and fixed it.

Reactions? – Basically a bit of a Firestorm in a tea cup

Some feel that NECSS disinviting him was the right decision … and others hold to a different position.

As for what Richard himself thought about being disinvited, well here is his response …

I woke up this morning to see a public announcement that my invitation to speak at NECSS 2016 had been withdrawn by the executive committee. I do not write this out of concern about my appearance or non-appearance at NECSS, but I wish there had been a friendly conversation before such unilateral action was taken. It is possible I could have allayed the committee members’ concerns, or, if not, at least we could have talked through their objections to my tweet. If our community is about anything it is that reasoned discussion is the best way to work through disagreements.

I might mention that, before receiving any word from NECSS, I had already deleted the tweet to which they objected. I did it purely because I was told that the video referenced a real woman, who had been threatened on earlier occasions because of YouTube videos in which she appeared to her disadvantage. I have no knowledge of the authenticity of the alleged death and rape threats. But to delete my tweet seemed the safest and most humane course of action. I have always condemned violence and threats of violence, for example in this tweet, which I also posted the day before the NECSS decision.

(it is first of the three tweets above)

I wish the NECSS every success at their conference. The science and scepticism community is too small and too important to let disagreements divide us and divert us from our mission of promoting a more critical and scientifically literate world.

Feminists vs Islamists – Is that really a thing?

There is a bit of information that is perhaps being missed by some of those within a US context who appear to be almost permanently ready to be offended.

Firstly, Richard Dawkins is very much a Feminist himself, and he makes that clear when asked, and also made it clear in the initial tweet.

Secondly, there is wholly valid criticism warranted for some Feminists who have a history of openly supporting right-wing theocratic Islamists, and support their attempts to silence and gag any who might dare to criticise the Islamist position. This is something you might not be exposed to within a US context, but would perhaps be very aware of if you lived in the UK. For example not too long ago we had the Goldsmiths Feminist society standing in solidity with the Goldsmiths Islamic societies attempt to harass and disrupt an ex-Muslim speaker, and you can read Jerry Coyne writing about that here as well.

That happened very recently within an academic context in the UK, and so tweeting the satire clip as a response to that is in many ways wholly appropriate and understandable.

If indeed you do not think that Feminists would actually support anti-gay, anti-feminist, misogynistic Islamists, then you might wish to revise that belief, because that bizarre juxtaposition is quite real ..

Personally I think NECSS have made a huge mistake here, and I’m really not grasping what motivated them to do this.

He removed the tweet when it was pointed out to him what it was really about before they disinvited him, and so it is quite frankly a very odd response indeed, and says far more about NECSS than it does about Richard Dawkins.

Pay close attention to any human and you will find stuff you like along with stuff you do not like, for example I love Bill Maher, but he really does have a bit of a blind spot when it comes to vaccines, and so I can criticise and disagree with his anti-vaccine stance, and yet also happily agree with almost everything else he says. It is not a “them” vs “us” world, but is instead just “us”.

Why is Richard Dawkins being held to a supposedly divine standard in which he is expected to never make a mistake, and then the moment he does, he gets thrown under the bus, what exactly is that about?

He is a gifted writer, an elegant and inspiring speaker, and even if you do not agree with every word he utters (not sure anybody does or could say they do for anybody), he does have a lot to bring, and so by disinviting him, NECSS and all those who attend have been intellectually impoverished.

Should you now avoid the NECSS crowd and demand your money back if you registered?

Nope, of course not, they are good folks doing good work, they have simply made a mistake.

9 thoughts on “@RichardDawkins has been disinvited from speaking at NECSS”