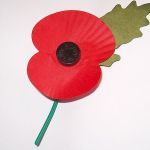 Today, the Sunday closest to 11th of November, is the day on which wreaths are formally laid in remembrance at Whitehall, in Central London.

Many of those that fought and died were atheists and humanists, but today only the religious are represented, the non-religious have been specifically excluded. As noted on the campaign site for a 21st century remembrance…

The Defence Humanists and British Humanist Association (BHA) are for the fifth year in a row advocating the inclusion of a humanist representative at the National Remembrance Day Ceremony in Whitehall. This year’s ceremony falls on the centenary of World War One, which means it is of crucial importance that service personnel of no religion are not ignored again once again by Government.

At the last count over 26,000 serving members of the Armed Forces described themselves as having ‘no religion’ – the largest group after Christianity, which has seen continuous decline in the six years since records began. The non-religious number eight times all the non-Christian religions combined, which, including Hindus, Muslims, Jews and Sikhs, number just over 3,000.

The Remembrance ceremony we now have was designed in 2005 by 14 religious groups who were invited by the government to review and renew the anniversary – which explains why the ceremony is so exclusively religious. Even the Queen, who pays tribute to everyone when she lays her wreath at the Cenotaph, is also, of course, “defender of the faith”.

Why is remembrance the exclusive preserve for only those that believe in a god, especially when so many don’t, and why should it be exclusively a religious ceremony?

What happened, happened to all, and so when we remember, it needs to include everybody and not exclude anybody.