The Guardian has a fabulous article today …I’ve cut and pasted the start of it here, so that you get the flavor … if it hooks you, I’ve put a link at the end to the entire article so that you can read it all. Beware .. we have a couple of pro-religious kooks here, but Evan and AC do a nice job in taking their arguments to pieces …

In the week that militant atheist Christopher Hitchens challenges Tony Blair to a debate about God, we ask five leading thinkers: do we need a deity? 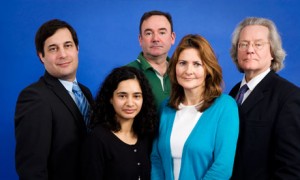 Anushka Asthana: What would a world without religion look like?

Cristina Odone: “I must stress here that I embrace the concept of religion as faith rather than simply a structure like the Vatican or a synagogue. When I think of religion I think of the injunctions that it has given its followers. Repair the world, a Jewish commandment. Love thy neighbour as thyself, the most famous Christian commandment. And look upon charity as something that you must do every day that the sun rises, which is a Muslim injunction.

“I think without such wonderful exhortations, our spirit would be the poorer and so would our society. And I think it is one of the tenets of religion, of all the major monotheistic religions, that each one of us is special, that each one of us deserves respect, having been made by God. I think that is something at the very heart of a good society.”

Jon Cruddas: “I agree. I think the generic element of all religions is the search for compassion. That’s quite a good departure point in terms of how you live your life… the search for virtue in our world.”

Evan Harris: “I agree with [Cristina] only in the sense that she’s appropriated to religion obvious moral rules that apply equally to people without religion. So you can’t really defend religion by claiming unto religion rules that predated them, that are statements of the obvious. And the real question is, ‘What would the world be like without organised religion’? Everyone has beliefs – it’s not reasonable to suggest that people wouldn’t have beliefs, mystical or otherwise. I think I’m with John Lennon on this, that it would be a much better place in terms of peace.

“There’s a wish to label those people who believe that there should be less of a role for religion in public policy, as somehow extreme, when they’re not extreme. I’ve looked carefully at what’s been done in the name of religion…”

CO: “And in the name of secularism, Evan? Fascism, communism?”

EH: “All that I could find in the name of atheism or secularism is a ban on head-scarves in Turkish universities and a proposed burqa ban in France. Both are wrong, but if that’s the worst that’s done in the name of a lack of religion, I’d rather run those risks. I mean, apostasy, blasphemy… It’s bad news for women and gay people where organised religion plays a major role in public policy.”

AA: Anthony, you’re nodding in agreement. But is there an argument that the good perhaps even in atheist people today is something that is the result of religion’s influence?

AC Grayling: “No. If you think about the dominance of Christianity in Europe, which really took hold right about the fourth century AD, that was nearly 1,000 years after Socrates and Plato and Aristotle had begun to think about the nature of the good and the good society. Have a look at the New Testament documents or those that were selected by the church as canonical. They say: give away all your money, turn your back on your family if they don’t agree with you. If people do bad things, help them to do them more, turn your other cheek. Take no thought for tomorrow, make no plans.