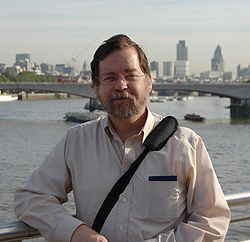 PZ is well-known, and also well worth listening to, not just because he is somebody who can communicate effectively, but also because he actually has something worth listening to, so it was a delight to see him coaxed him out of his academic seclusion for a trip to Ireland and also, on his way back, to a Skeptics In the Pub in Glasgow.

I have two treats for you today. The first is a direct confrontation with some Muslims who stuck a camera under his nose while he was out for a walk, the second is his complete talk at Skeptics in the Pub in Glasgow.

So on with the first. The location here is the International Atheist Convention in Dublin on 6th June. Some wacky Muslims registered and turned up to “engage” with the non believers. At one point they turn their camera on PZ and attempt to convince him that the science in the Qu’ran is accurate. One of the claims they make is to say that the description of the embryo within the Qu’ran is accurate and has been backed up by modern embryologists. PZ calmly explains that this is simply not true and that what is described is not only vague and just a guess, but is also just a ripped off copy of earlier Greek writings, and that it is all wrong. The refute this with the “But what is in the Qu’ran is indeed confirmed by modern embryologists, are you going against what they say?”  … This is simply hilarious .. it was at this point (20 mins in) he explains that he himself is an embryologist. Rebecca Watson blogs about it all here.

Anyway, here is the full video that the Muslims made … enjoy. Oh and at about 23 mins in AronRa joins in. Also, in the same video, at minute 32, they switch to their brief chat with Richard Dawkins. The best moment here is Richard saying at about min 36, “What!!, what are you talking about”, which is his polite way of saying that what he was hearing is complete bollocks.

Now, on to the second, which is educational. Here for his Skeptics in the Pub talk in Glasgow, PZ gave a talk on his specialist topic, embryology. In this video he talks about why evolution doesn’t predict the crazy stupid things creationists say it does. As a bit of background, some local Glasgow creationists put out a call for folks to turn up and stumble him with questions he would not be able to answer, PZ blogs about that here. Oh and one final warning, if you click below, then be aware that you are about to spend almost an hour watching a video on developmental biology, and will in all probability enjoy it. Now that in itself says more about PZ than the topic itself, he really is a great communicator.

As an appendix, here is a guest post on Pharyngula by somebody else at the above talk.