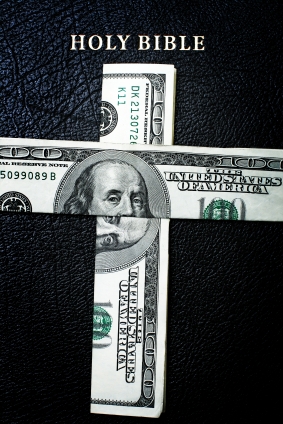 In the age of google those that promote weird or bizarre claims are being challenged as never before because we no longer have to simply accept their word, we can look it up, and this is especially true of the Prosperity gospel.

As I’m sure you are aware, at least I hope so, that the prosperity gospel preachers you see on TV are running a scam designed to motivate the gullible into donating so that they can fund their lavish lifestyle. So when faced with the public information that they are spending such funds on just themselves, for example private jets, they how do they respond to such criticism?

“Now Oral [Roberts] used to fly airlines, But even back then it got to the place where it was agitating his spirit, people coming up to him, he had become famous, and they wanted him to pray for them and all that. You can’t manage that today, this dope-filled world, and get in a long tube with a bunch of demons.”

Apparently it is all “necessary” because “this world is dying”. They are of course correct, their world of utilising belief to enrich themselves is indeed dying, because people are catching on to their scam.

Kenneth Copeland and his wife, Gloria Copeland, were featured in a 2015 episode of Last Week Tonight with John Oliver that gained media attention.[31][32][33][34] Comedian John Oliver criticized the Copelands for using tax laws to live in a $6.3 million mansion as the parsonage allowance for their home is not subject to income taxes,[35] for using church donations to buy a $20 million jet that was used for trips to a ski resort and a private game ranch,[36] and for promotion of healing through faith and skepticism of medicine, which Oliver highlighted with a video of Gloria Copeland saying that doctors give patients “poison that will make you sicker” and that the church is an alternative to medical treatment: “Which do you want to do? Do you want to do that,” Copeland asked of the doctor’s “poison” treatment, “or do you want to sit here on a Saturday morning, hear the word of God, and let faith come into your heart and be healed?” Oliver then played an excerpt of the Trevor Glass documentary Suffer The Children[37][38] that featured Bonnie Parker, a woman who died from cancer after sending money to the Copelands instead of receiving treatment. Parker’s daughter said in the documentary that notebooks left behind by her mother claimed that, according to the Copelands, the more money she sent to them, the greater chance she had of being healed.

… and as for the other chap in that clip, Mr Duplantis, he tends to spin such outrageous and absurd stories that other prosperity gospel preachers denounce him …

… Duplantis describes how God miraculously transported him from Monroe to Lafayette (a three hour, 184-mile journey according to Google maps) in under 30 minutes – arriving just in time to see a dying girl miraculously healed

…When Pastor Ray Bevan heard about it, he called Jesse Duplantis a liar. This was a shocking event. Bevan was the pastor of King’s Church in Newport, Wales. This mega-church had a congregation of over 1,000 at the time, making it by far the most successful prosperity church within driving distance of me. For Bevan to publicly denounce one of the prosperity gospel’s biggest stars was a big deal.

What exactly is this Prosperity gospel that they promote?

It is a belief that first emerged in the 1950s that involves you making financial donations to help support the work of god, and that when you do so, god will supposedly reward you financially for doing so. It faces vigorous criticism from almost all mainstream variations of Christianity as a belief that is completely irresponsible and is also one that promotes cult like authoritarian organisations where the leaders dominate and control the lives of their followers.

There is rather a lot of robust fact-based criticism that you can read on the Wikipedia page all about it, here, but perhaps the very best takedown of it all involves Last Week Tonight with John Oliver doing a satire of it all by setting up his very own church and then begging for donations (which he later donated to charity). Here is a clip that has been viewed almost 9 million times …

… and then as a follow-up, here is what happened.

1 thought on “Is the Prosperity gospel fraud?”