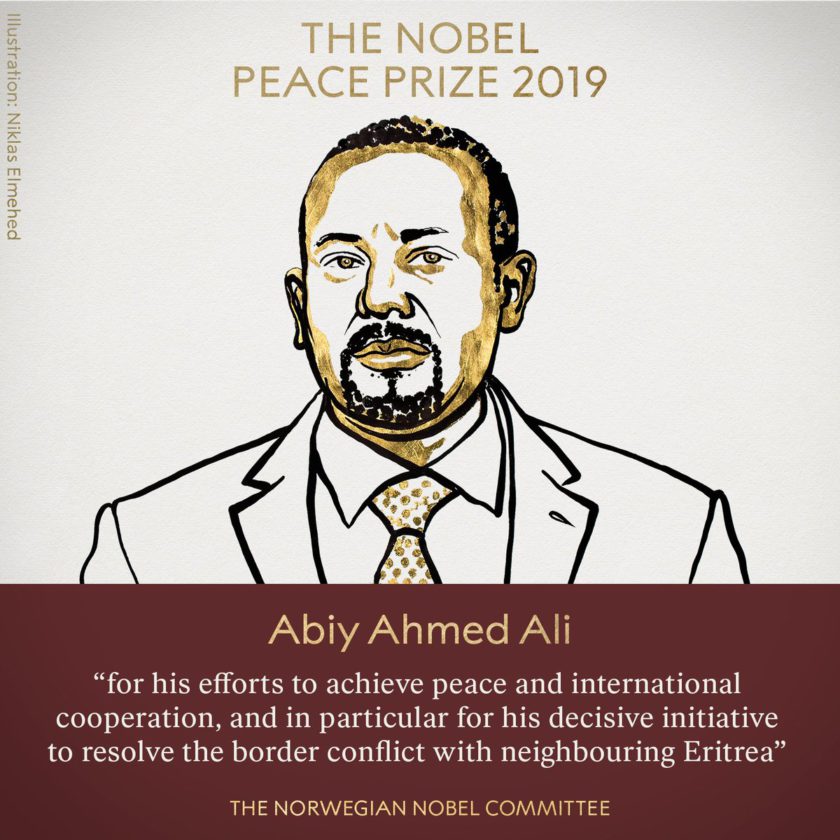 I generally applaud the 3 science awards and the literature award, but this one – not so much. Over the years some of the “winners” have been truly bizarre choices. This is perhaps a reflection of it being a political one.

This year they did get it right, but some of the past awards … well … not so much.

Let’s take a brief look and those past failures before we get into the details of who has won this year and why it is well deserved.

What does Peace even mean?

… and goes on to specify that the prize is to be awarded by a committee of five people chosen by the Norwegian Parliament.

Asking politicians to decide is perhaps the fundamental problem.

As stipulated by Nobel in his will, the three science Prizes are decided by the Swedish science academies, and so they involve a great deal of scientific rigour in their selection process. Members of science academies tend to know a bit about science and thus can make good choices. Because “Peace” is chosen by politicians it is deeply subjective and also highly politicised.

But why did Nobel create a Peace prize?

So what has been the problem?

To illustrate what I’m getting at, let’s look back and see some of the winners from previous years …

What perhaps makes the peace prize even weirder is that Mahatma Gandhi never won. He was nominated in 1937, 1938, 1939, 1947, but never received it. That specific non-award has been publicly regretted. Geir Lundestad, Secretary of Norwegian Nobel Committee, said in 2006 …

Having said all that, it is not all bad because sometimes they do get it right by spotlighting somebody truly inspirational. For example Nelson Mandela, or Martin Luther King Jr. (You can find a full list of past winners here). This year is an example of truly picking the right person.

But first, just before we go there, here is one last jaw-dropper.

Who gets nominated is kept secret for 50 years, and then all is revealed.

So beyond that 50 year blackout resides a rather surprising nomination or two.

(Insert drum role here and prepare to be blown away)

Hitler and Mussolini were both nominated for the Nobel Peace Prize.

You might be tempted to think that this has just got to be parody. Alas no, it appears to be true. (I did also check the Nobel Nomination archives myself just to be sure and verified both)

I suspect the past committee choked on those nominations when they sat down to consider them.

Er … well yes, let’s quick brush over that and move on.

Now for this year’s reveal.

The Norwegian Nobel Committee has decided to award the Nobel Peace Prize for 2019 to Ethiopian Prime Minister Abiy Ahmed Ali for his efforts to achieve peace and international cooperation, and in particular for his decisive initiative to resolve the border conflict with neighbouring Eritrea. The prize is also meant to recognise all the stakeholders working for peace and reconciliation in Ethiopia and in the East and Northeast African regions.

When Abiy Ahmed became Prime Minister in April 2018, he made it clear that he wished to resume peace talks with Eritrea. In close cooperation with Isaias Afwerki, the President of Eritrea, Abiy Ahmed quickly worked out the principles of a peace agreement to end the long “no peace, no war” stalemate between the two countries. These principles are set out in the declarations that Prime Minister Abiy and President Afwerki signed in Asmara and Jeddah last July and September. An important premise for the breakthrough was Abiy Ahmed’s unconditional willingness to accept the arbitration ruling of an international boundary commission in 2002.

Peace does not arise from the actions of one party alone. When Prime Minister Abiy reached out his hand, President Afwerki grasped it, and helped to formalise the peace process between the two countries. The Norwegian Nobel Committee hopes the peace agreement will help to bring about positive change for the entire populations of Ethiopia and Eritrea.

In Ethiopia, even if much work remains, Abiy Ahmed has initiated important reforms that give many citizens hope for a better life and a brighter future. He spent his first 100 days as Prime Minister lifting the country’s state of emergency, granting amnesty to thousands of political prisoners, discontinuing media censorship, legalising outlawed opposition groups, dismissing military and civilian leaders who were suspected of corruption, and significantly increasing the influence of women in Ethiopian political and community life. He has also pledged to strengthen democracy by holding free and fair elections.

In the wake of the peace process with Eritrea, Prime Minister Abiy has engaged in other peace and reconciliation processes in East and Northeast Africa. In September 2018 he and his government contributed actively to the normalisation of diplomatic relations between Eritrea and Djibouti after many years of political hostility. Additionally, Abiy Ahmed has sought to mediate between Kenya and Somalia in their protracted conflict over rights to a disputed marine area. There is now hope for a resolution to this conflict. In Sudan, the military regime and the opposition have returned to the negotiating table. On the 17th of August, they released a joint draft of a new constitution intended to secure a peaceful transition to civil rule in the country. Prime Minister Abiy played a key role in the process that led to the agreement.

Ethiopia is a country of many different languages and peoples. Lately, old ethnic rivalries have flared up. According to international observers, up to three million Ethiopians may be internally displaced. That is in addition to the million or so refugees and asylum seekers from neighbouring countries. As Prime Minister, Abiy Ahmed has sought to promote reconciliation, solidarity and social justice. However, many challenges remain unresolved. Ethnic strife continues to escalate, and we have seen troubling examples of this in recent weeks and months. No doubt some people will think this year’s prize is being awarded too early. The Norwegian Nobel Committee believes it is now that Abiy Ahmed’s efforts deserve recognition and need encouragement.

The Norwegian Nobel Committee hopes that the Nobel Peace Prize will strengthen Prime Minister Abiy in his important work for peace and reconciliation. Ethiopia is Africa’s second most populous country and has East Africa’s largest economy. A peaceful, stable and successful Ethiopia will have many positive side-effects, and will help to strengthen fraternity among nations and peoples in the region. With the provisions of Alfred Nobel’s will firmly in mind, the Norwegian Nobel Committee sees Abiy Ahmed as the person who in the preceding year has done the most to deserve the Nobel Peace Prize for 2019.