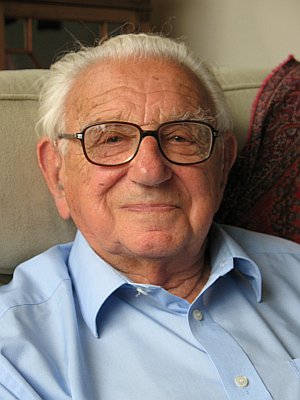 Back in 1938, Nicholas Winton was a 29-year-old London stockbroker, who on a visit to Prague became aware of the looming war and also the Kristallnacht, the bloodypogrom (violent attack) against German and Austrian Jews on the nights of November 9 and 10, 1938, so he decided to take steps to help …

“I found out that the children of refugees and other groups of people who were enemies of Hitler weren’t being looked after. I decided to try to get permits to Britain for them. I found out that the conditions which were laid down for bringing in a child were chiefly that you had a family that was willing and able to look after the child, and £50, which was quite a large sum of money in those days, that was to be deposited at the Home Office. The situation was heartbreaking. Many of the refugees hadn’t the price of a meal. Some of the mothers tried desperately to get money to buy food for themselves and their children. The parents desperately wanted at least to get their children to safety when they couldn’t manage to get visas for the whole family. I began to realize what suffering there is when armies start to march.”

In terms of his mission, Winton was not thinking in small numbers, but of thousands of children. He was ready to start a mass evacuation.

“Everybody in Prague said, ‘Look, there is no organization in Prague to deal with refugee children, nobody will let the children go on their own, but if you want to have a go, have a go.’ And I think there is nothing that can’t be done if it is fundamentally reasonable.”

In the end he managed to rescue 669 and get them back to the UK and into good homes where families welcomed them.

Winton kept quiet about his humanitarian exploits for many years, until his wife Grete found a detailed scrapbook in their attic in 1988. It contained lists of the children, including their parents’ names, and the names and addresses of the families that took them in. By sending letters to these addresses, 80 of “Winton’s children” were found in Britain. The world found out about his work in 1988 during an episode of the BBC television programme That’s Life! when he was invited as a member of the audience. At one point Winton’s scrapbook was shown, and his achievements explained. The host of the programme, Esther Rantzen, asked whether any in the audience owed their lives to Winton … and what happened next … well here is that moment …

Born in 1909, he is still alive and well at the age of 104. He still wears a ring given to him by some of the children he saved. It is inscribed with a line from the Talmud, the book of Jewish law. It reads:
“Save one life, save the world.“