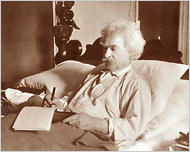 Apparently Mark Twain’s Autobiography is flying off the shelves these days. Confused? Puzzled by the fact that he has been dead for such a long time and wondering whats up? Well, its like this … the beloved creator of Tom Sawyer, Huckleberry Finn and some of the most frequently misquoted catchphrases in the English language left behind 5,000 unedited pages of memoirs when he died in 1910, together with handwritten notes saying that he did not want them to hit bookshops for at least a century. So now here we are 100 years later and its time to publish … time for a new generation in a new age to be finally introduced to his wit and charm.

“He had doubts about God, and in the autobiography, he questions the imperial mission of the US in Cuba, Puerto Rico and the Philippines. He’s also critical of [Theodore] Roosevelt, and takes the view that patriotism was the last refuge of the scoundrel. Twain also disliked sending Christian missionaries to Africa. He said they had enough business to be getting on with at home: with lynching going on in the South, he thought they should try to convert the heathens down there.”

Parts have already been in print, but there is much here that has never been seen before, so it should be no surprise to discover that it has become a smash hit. Initially when the publishers found themselves with this half-a-million word doorstop, they planned a modest 7,500 copy run and never imagined that it would become such a success, yet it has ended up on the best-seller lists and has already been back to the presses six times to meet demand.

So, if you have not yet been introduced to Twain, there here are a few of my favorite quotes … these should hopefully give you an insight into his mind and thoughts …

I’m sure you must of recognized some of those quotes, but I bet it was a surprise to discover they were his. Ah, but why am I blogging about him? Well basically because he was in many ways a skeptics skeptic. Not sure about that? OK, try these quotes …

So there you have it then … a flavor of the man himself. If I have now motivated you to go hunt down and read some of his writings, then go to it and enjoy. You will quickly discover that even though it was all written a long time ago, much of it is still very much in tune 100 years later.