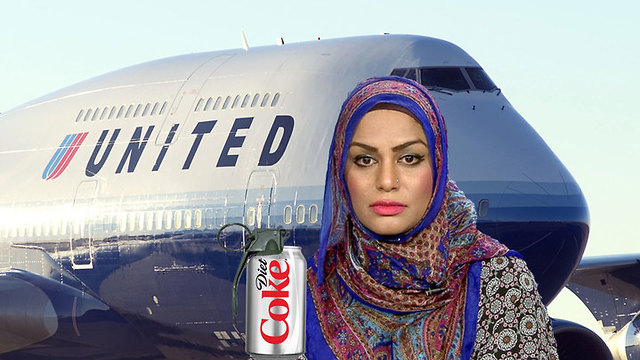 As I’m sure you are aware, Tahera Ahmad had a story that went viral in the mainstream media …

I am sitting on a United airlines flight in the air 30,000ft above and I am in tears of humiliation from discrimination. The flight attendant asked me what I would like to drink and I requested a can of diet coke. She brought me a can that was open so I requested an unopened can due to hygienic reasons. She said no one has consumed from the drink, but I requested an unopened can. She responded, “Well I’m sorry I just can’t give you an unopened can so no diet coke for you.” She then brought the man sitting next to me a can of UNOPENED beer. So I asked her again why she refused to give me an UNOPENED can of diet coke. She said, “We are unauthorized to give unopened cans to people because they may use it as a WEAPON on the plane.” So I told her that she was clearly discriminating against me because she gave the man next to me an unopened can of beer. She looked at his can, quickly grabbed it and opened it and said, “it’s so you don’t use it as a weapon.” Apphauled at her behavior I asked people around me if they witnessed this discriminatory and disgusting behavior and the man sitting in an aisle across from me yelled out to me, “you Moslem, you need to shut the F** up.” I said, “what?!” He then leaned over from his seat, looked me straight in the eyes and said, “yes you know you would use it as a WEAPON so shut the f**k up.” I felt the hate in his voice and his raging eyes. I can’t help but cry on this plane because I thought people would defend me and say something. Some people just shook their heads in dismay.  ‪#‎IslamophobiaISREAL‬

… but is that what really happened?

This is her side of it, and so it would be fascinating to get input from others on the same flight. With that thought in mind I bring you this from FlyerTalk …

This lady is not telling the truth
I was actually on this flight on Friday evening from ORD to DCA. I have been a reader of this forum for a long time but seeing this all over the news made me sign up so I could tell you what really happened here and hopefully stop this liar in her tracks. I was sitting close enough to her to hear everything that was said. The flight attendant came up to the lady (I believe she even took her order first in the entire cabin as she was seated in the bulkhead 7d) and took her order. She ordered a coke zero and a hot green tea with a Splenda. The flight attendant handed her a full diet coke with a cup on top and then told her that the green tea would take a few minutes and she would get it to her ASAP. The lady said very rudely and condescending to the FA that she ordered a coke zero and basically pushed the soda back to the flight attendant. The FA said she was sorry and attempted to find a coke zero for her (which she did not have many of) and told her that she could only give her a portion of the can not the full can. This is when the lady in question started to freak out and told the FA “What do you think I will use this as a weapon?! Why can’t I have the whole can? I think you are discriminating against me. I need your name….” The lady just kept yelling to her “I need your name… I am being discriminated against.” This is when a few passengers told her to calm down and one guy told her to “shut her mouth and she is being ridiculous over a can of coke”. No one ever said anything anti-Muslim to her at all. She was the one who started screaming discrimination when she did not get what she wanted. The FA asked her numerous times if she would like anything else when the lady just basically pushed her away with a hand in her face. The lady then got onto her phone with her credit card and paid for the internet so she could start spinning this story on social media and she was never in tears. This person is a liar plain and simple and is just pulling the discrimination card.
Is the above true?
I note that he introduces information that was not contained within any of the public news reports. He specifies that she requested a Coke Zero and not a Diet Coke, and also specifies exactly where she was sitting, so it would be very easy for the airline to verify that.

So where are we now?

Who should we believe?

I’m leaning towards the account from the other passenger being a more accurate description of what actually happened, not just because it is more aligned with what we know about how humans actually behave, but also because Ms Ahmad appears to have a bit of a history of being perpetually offended.

She claims that she was not given a diet code and that is #Islamophobia, yet has nobody to back up and verify her claim of discrimination and none of the media stories have verified any of this yet are running with it as a fact based claim. We also now have this chap popping up to tell quite a different far more reasonable story.

… and Ms Ahmad wants to gag and silence Ayaan Hirsi Ali, so in that context, who exactly is actually being discriminated against and who is doing the discriminating?

Time for a break, I think I’ll go and have a diet coke.

1 thought on “Islamophobia or a misunderstanding over a diet coke?”