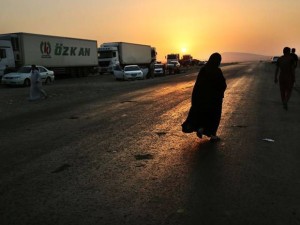 Patrick Cockburn, an Irish journalist who has been a Middle East correspondent since 1979, has published part 2 of his harrowing stories about life under ISIS.

In Part 1 which was published on 16th May (you can find it here), Mr Cockburn documents some of the truly harrowing stories from the women who have fled from the Jihadist state. He wrote …

Aysha was forced to pledge total obedience to her husband, even when it came to suicide bombing. What happened to her illustrates the complete subjection of women under the rule of the self-proclaimed “Islamic State”. Their status has been reduced to that of chattels without rights or independence.

You should first read that, it is truly heartbreaking stuff.

On the day Ibrahim fled his home city of Fallujah, crowds were gathering to witness the execution of two women who had refused to marry Islamic State (Isis) militants. A 49-year-old Sunni Arab, he says he was shocked “because I knew that those women were Sunnis from the country neighbourhood of Fallujah”.

It was the vulnerability of his two daughters, aged 21 and 23, to “temporary marriage” with Isis commanders, fighters and militants that led Ibrahim, which is not his real name, to leave Fallujah two months ago for Baghdad 40 miles away and later to seek refuge in Iraqi Kurdistan.

Isis have apparently granted those within their ranks to simply help themselves to women, and are using Islam to justify this rape and abuse.

Ibrahim says that Isis recently amended a “temporary marriage” order, extending it to civilians in peaceful areas and not just in war zones. Isis had previously enforced the “Jihad marriage” order, also known as the “Jihad al-Nikah”, in which jihad fighters have the right to take women, including minors, as captives and marry them for a short time, which might be one day or even a few hours. The order also gives the jihadists the right to marry more than one woman.

Given the astonishing degree of intolerance, misogyney and violence wielded by ISIS you would expect that many would reject all they are and all they promote, but apparently not. …

Akram Ghanem, a 51-year-old member of the Shabak minority from Hamdaniyah, a town just outside Mosul, who spoke to The Independent on Sunday …. says he fears that it can never be defeated because it appeals to too many ignorant people.

Sadly yes, the idea itself attracts the disillusioned and so they join what is essentially an armed religious cult that then proceeds to totally dominate their life. Some see the light and have enough common sense and resources to quietly flee in the night (hence we hear these stories), but many others remain trapped inside the bubble of belief, delusion and complete and utter absurdity …

in February of this year, an announcement banned the keeping of pigeons above the roofs of houses with those who continue to do so threatened with fines, imprisonment and flogging. The reason for this is that pigeons “are harming one’s Muslim and Muslim women neighbours, revealing the genitals [of the pigeons]”.

One further observation, much of the shape and form of the ISIS state taking shape is in many ways not all that different than Saudi Arabia, and so this variation of extreme islam is not unique. It has spread and taken root because Saudi Arabia has been spending hundreds of billions of dollars to export their strict variation of Islam and displace the more moderate variations. If you wish to tackle islamic extremism, then you need to start with the fountainhead of it all, Saudi Arabia.