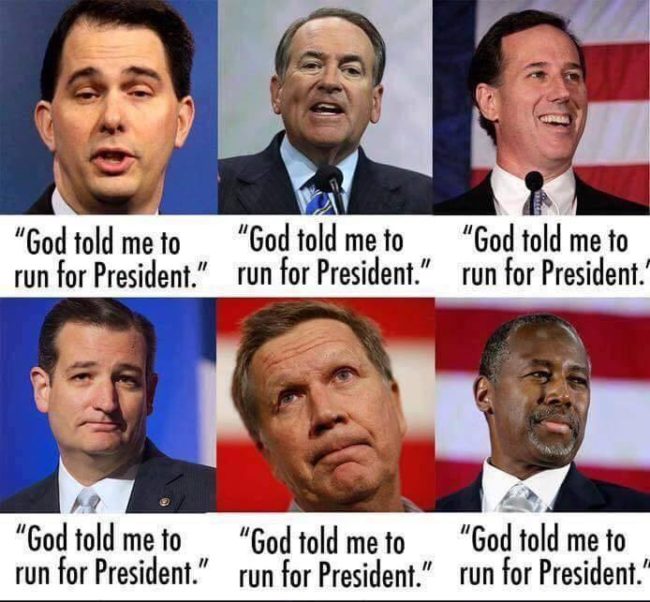 It does strike me as rather odd to discover that God has been telling quite a few Republicans to run for election as President, and yet in every single case God failed to deliver.

We might laugh, and mock, but it is also a rather interesting topic as well. So let’s ask ourselves a few questions.

Generally no, they quite sincerely believe it to be true and so they are in all probability quite sure that God has indeed told them to run for office.

This is a very tempting answer to reach out for, but strictly speaking no, not in a clinical sense. They are all fully functional socially active humans who simply believe things that are not true. We all, at one time or another, will often believe things that are not wholly factual and that simply verifies that we are human, and not delusional. They are of course clearly wrong and there perhaps rests the key to understanding it.

If somebody asserts that the sky is green, you might think they were crazy and point out that if they looked out the window they could see that it was clearly a beautiful red sunset. Others look and verify this. Oh but wait, if you then learned that this person was in reality red-green colour blind, then the penny would drop that this was really an issue regarding perception and human vision. Neither lying nor delusion explain it, instead they were simply making a subjective mistake. It could of course be moved into something that was objective by taking a measurement of where exactly on the spectrum the light was and that would sort it all out.

Is it really just that simple?

Actually no it is not, instead that is a perhaps over simplistic illustration designed to reveal that often it is not a binary choice between lying or delusion, but can instead be far more complex, and that something else is the real answer.

Religion is a topic that fascinates many psychologists. The human religious experience is in many ways very similar to a psychotic episode. Often those formally diagnosed with some variation of mental illness will often retain a belief that they are in some way divine, or that God is talking to them, or that they are possessed. Statistically, about 24% of those admitted to hospital have some form of religious belief along such lines.

Paper: The validation of a religiosity measure for individuals with schizophrenia

This quite naturally leads some to ponder what causes what. Does being ultra religious make you prone to a psychosis, or does having a psychosis lead humans into being ultra-religious?

It should perhaps also be recognised that often those with such issues find that religion is a solution because it enables them to cope. For some it can of course also be harmful, but for others this need not be the case and can form part of their therapy.

Is Religion a Delusion?

Strictly speaking, in a clinical sense, I would argue no, generally not.

Humans hold specific beliefs at a deep emotional level, and we need not restrict ourselves to religion to illustrate this.

Homeopathy might be a good example. When studied, it has been categorically demonstrated to do nothing beyond a placebo, and yet we live in a world where …

… and yet, it just does not work, and has been demonstrated to not work.This is truly bizarre and so an easy but wrong answer is to deploy the label “delusional” or “stupid”.

Homeopathy has consequences. Imagine setting off to the tropics with a homeopathy remedy that is claimed to protect you from getting malaria, but actually does nothing at all. Would anybody be draft enough to skip taking actual anti-malarial medication that is proven to work and opt for this, or for that matter would any homeopath be daft enough to recommend this? You would hope not, but sadly they do …

Next Tuff found a variety of homeopaths by searching on the internet, just as any young student might do. She then visited or phoned ten of them, mainly based in and around London. In each case, Tuff secretly recorded the conversations in order to document the consultation. The results were shocking. Seven out of the ten homeopaths failed to ask about the patient’s medical background and also failed to offer any general advice about bite prevention. Worse still, ten out of ten homeopaths were willing to advise homeopathic protection against malaria instead of conventional treatment, which would have put our pretend traveller’s life at risk.

So back to my question, are those doing this clinically crazy? Nope.

Are they simply con-men out to make a quick buck? Once again, no, they truly sincerely believe it all.

Are they simply being stupid? Again no, the degree of intelligent plays no part here.

Now back to the actual topic. Substitute the word “Religion” for the work “Homeopathy” and you find something similar going on.

What does “God Spoke to me” actually mean?

Generally this might appear to be people telling you that they are hearing voices, but if you drill down into the specifics, then you find that is not usually the case.

Often it plays out in a manner in which people interpret things to be god speaking to them. Suppose one of our potential candidates was pondering over the idea of running for office. In order to make this decision he decides to pray and ask God. When he happens to next read his bible, a verse pops out in which it is an old testament story about God telling Israel to go and take the promised land.  This resonates an an emotional level, and so this is interpreted as an answer to prayer, God has, in his or her mind, used the bible to tell him to run for office.

“But that’s Crazy?” you might splutter. Well, not really in a clinical sense, because what we have is an individual who is simply permitting emotions to direct life choices via this text and opts to rationalise that as God. There might be no understand what is actually happening, and so some use rather odd religious terms to explain it, but there really is nothing supernatural going on.

This is normal human behaviour. Tell somebody that for the next week events in their life will be manipulated via actors to teach them life lessons, then give them a diary to record what they learn each day. Then walk away, do nothing, and come back a week later. They will have recorded lots of incidents where they perceive that things had been setup to teach them a life lesson and will have written up lots of notes – yet nothing was going on, nobody was doing anything. I’ve seen this done. If given a belief that there is a higher power looking after us, then we will find meaning and direction within the random chaos of life. It tells us a great deal about the pattern seeking engine sitting between our ears and very little about objective reality.

What happens when God gets it wrong?

Does the belief collapse when faced with a clear decisive failure?

If you asked each of those who were quite sure that God asked them to run for office, they would today confirm that this is still the case. If asked what happened, they would rationalise things by explaining that it was simply part of God’s plan, the were supposed to run, but not actually win.

And that is how it usually works out, we rationalise like this and so retain the emotional investment we have in the idea we have bought into in a big way.

Crazy or delusional? Nope, just human, it is the way many of us are.