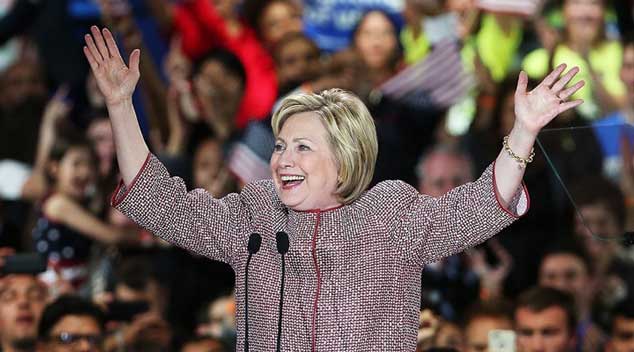 The political arena is one that perhaps does require a rather thick skin, and anybody who steps in will be on the receiving end of rather a lot of flack. However, sometimes stuff pops up that is way beyond the norm. One recent example that surprised me a bit was one bit of criticism deployed against Hilary Clinton, specifically the Armani jacket she wore when supposedly giving a speech about income inequality…

You would think someone would say: "Hey, Hillary, maybe don't give this speech on inequality wearing a $12k jacket" https://t.co/pTGFlW6BdD

For the record, the above Tweet is to illustrate an example of what was being said and is not the definitive tweet. It illustrates how many jumped on this bandwagon and ran with it without checking, and given that Sara Westwood is a journalist, you would have expected her to fact check … but apparently not.

There are a two important points I’d like to draw out here, so let’s go through each in turn.

Point 1- The claim is mostly false

The essence of the claim is that she purchased a $12,000 Giorgio Armani jacket to deliver a speech about income inequality, and as highlighted by snopes after investigating it all, it turns out that the claim is indeed mostly false.

It is not true that she wore it while giving a speech on income equality.

The full text of what she spoke about while wearing it is available and not once did she use the term “income inequality”.

For precise details of the analysis on it all, just surf on over to Snopes here.

Point 2 – Why exactly is what she wore Newsworthy?

Shall we now proceed to criticise Donald Trump for the $7,000 Brioni suits that he wears and just ignore what any of them actually says?

What strikes me is that the real crime that Hilary is guilty of is that she is the wrong gender, and as a result we end up with utterly absurd criticism such as this being deployed. If there is to be criticism, then let it be fact-based, focused on proposed policies, and not simply because of how she dresses.

What makes this all utterly absurd is that if you are female then you are in a no win situation when on a platform. Either the candidate is dressing too expensively, or is looking too tatty, and so the focus is on appearance and nothing of any real substance at all.

Obama is, in my view, one of the most outstanding US Presidents ever, and yet has been suffering a continuously vile flow of constant abuse, the propagation of derogatory myths concerning him, and a GOP opposition determined to blockade anything and everything he strove to achieve in order the better the lives of millions. Not because they did not agree with his policies, but simply because his skin tone is the wrong colour.

We now face the distinct possibility of more of the same.

It is now highly probable that Hilary will be elected in November, and if so, then we will potentially see more of the same …  a continuously vile flow of constant abuse, the propagation of derogatory myths concerning her, and a GOP opposition determined to blockade anything and everything she will strive for in order the better the lives of millions. Not because they do not agree with her policies, but simply because she is the wrong gender.