Suppose you lived in that bastion of extremely strict fanatical Islamist thinking, Saudi Arabia, and you were wicked enough to not only rape a child, a 5 year old, but also then attempted to cover up your crime by murdering that same 5 year old, what would you expect to happen if you were caught?

If indeed crimes such as blogging secular ideas and criticism of the current regime merits a 10 year jail sentence, and a thousand lashes in the public square, then one would perhaps expect something as vile as rape and murder of a 5 year old child to inspire a queue of executioners to line up ready to dispense justice …

Er no, apparently not.

This is not a theoretical exercise but a very real case. Fayhan al-Ghamdi, a popular Saudi cleric did indeed rape and then murder his own 5 year old daughter, and was after a lot of fuss, jailed.  What was then on offer was the ability to simply pay a modest fine to be released, and that was to have been the end of the matter as far as the authorities were concerned.

How could something like that ever be described as justice?

It works like this. If you murder somebody then there are various options, one of which is to pay blood money (Diyya) if the heirs of the victim agree …

in Islamic Sharia law, is the financial compensation paid to the victim or heirs of a victim in the cases of murder, bodily harm or property damage. It is an alternative punishment to Qisas (equal retaliation)

It is specified in the Quran so this must be justice … right?

Oh wait, here is the Catch-22; in this specific case the murder victim’s nearest relative is also the murderer, and since all he needs to do is to agree with himself that Diyya is the appropriate response for the brutal crime committed against his own daughter by himself, then this in effect becomes a literal license to commit murder and get away with it, and as you can probably grasp without thinking too hard, is utterly absurd.

You may of course have guessed, but I’m not really writing about the crimes of an abusive Saudi cleric, and am instead using his case as a contrast to the treatment of Raif Badawi by the Saudi Authorities.

Raif Badawi sits in jail, after being sentenced to 10 years and 1,000 lashes, for the “crime” of simply writing a blog that dared to criticise the corrupt theocratic dictatorship in Saudi Arabia, meanwhile a cleric, a man guilty beyond any doubt of an actual rape and murder of a 5 year old child, potentially walks free.

Last month the sentence issued to Mr Badawi was reviewed and upheld.

So what comes next, will we (the UK and others) now proceed to recognise the ISIS caliphate as a state, sell it arms, solicit its investment and then offer only the politest rebuke when innocent heads are sliced off and opposing voices are jailed? When compared to the regime in Saudi Arabia, they really are not all that different, except for some rather odd reason Saudi Arabia is still our “friend”.

If these indeed are our “friends”, then I really do wonder what it takes to become an enemy of the state. Apparently being prepared to buy arms from us is all it takes to trump any concerns about human rights.

Meanwhile, the fact that our government might indeed be prepared to continue to cosy up to a brutal theocratic dictatorship, and refuse to raise any serious diplomatic protests over the treatment of Raif Badawi least it upset the house of Saud, but that should not in any way imply that the rest of us need go along with this – oh and we also don’t get jailed for daring to pen criticism of government policy, and that is of course a rather stark contrast to Saudi Arabia where basic human rights are not available. 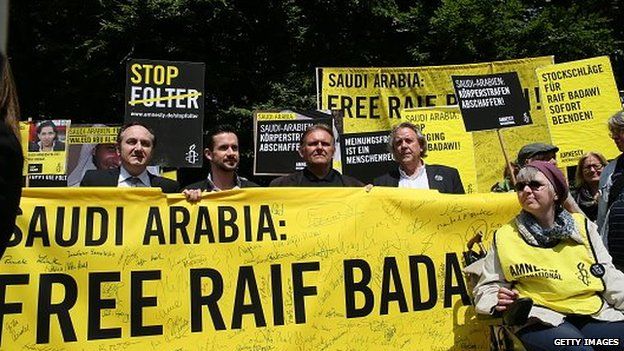